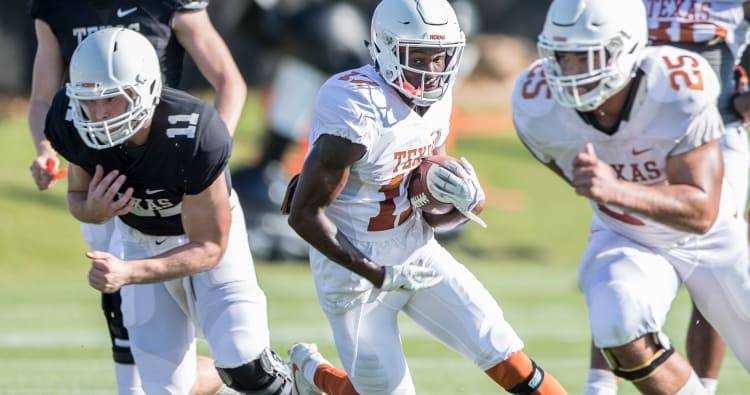 Career numbers: None yet

Hemphill-Mapps was one of three wide receiver headliners of the Charlie Strong’s final recruiting class along with Collin Johnson and Devin Duvernay. He was the lowest-rated of the three, a three-star recruit and the 67th-rated receiver prospect in the country per 247Sports’ composite, which also had him as the No. 384-ranked overall recruit nationally.

Signing him was an adventure. He originally committed to Mack Brown back in August 2013, just before his sophomore year at Manvel. But then he opened his recruiting back up when Brown was fired after that season. Strong continued to pursue him, though. Hemphill-Mapps was at Royal-Memorial Stadium on a visit for Strong’s 2014 coaching debut against North Texas and he ended up committing to the Longhorns again that October.

RELATED: Our 2016 Signing Day Q&A with Mapps — including why he decommitted, then recommitted

WHO HEMPHILL-MAPPS HAS BEEN HERE — SO FAR

Hemphill-Mapps redshirted last season, but has earned a chance to become a starter thanks to an impressive spring and strong start to fall camp this month. He was one of many young players who impressed at the spring game; he had five catches for 84 yards that day, second on the team behind only Johnson.

He committed to Brown, signed with Strong and now will play for Tom Herman. Losing your head coach during your redshirt freshman season can’t be mentally easy. But a new head coach also offers a fresh slate and a chance to impress. It looks like he’s impressed Herman and new offensive coordinator Tim Beck enough and may be poised for a breakout season.

If Johnson is right, then Hemphill-Mapps can “just roll out of bed and play football.” Texas would like to see him roll through defensive backs as a slot receiver. At 6-1, he’s small considering the size of those out wide. The coaching staff has praised him internally for excellent ball security and an ability to maneuver in traffic. It’s difficult to gauge what kind of statistics he’ll put up as a redshirt freshman, especially because this is a new offense. But the coaching staff wants to spread the ball around.

Triplets of the Big 12: Kansas State