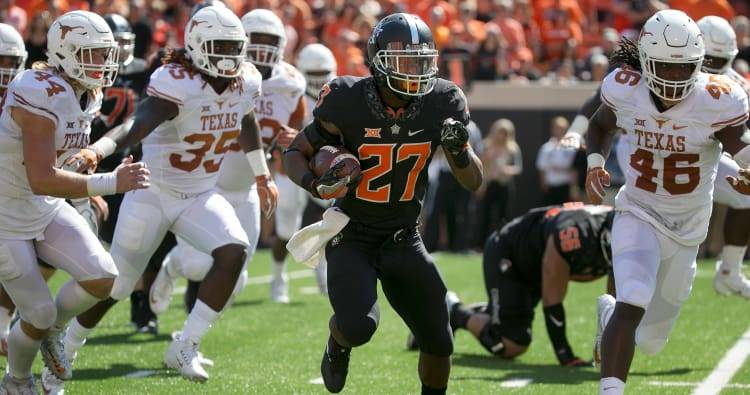 Has there ever been a better fit for the Big 12 than a Cowboy named Justice? Justice Hill burst onto the scene as a freshman in 2016, rushing for 1,142 yards and six touchdowns for 10-3 Oklahoma State. He reached 100 yards six times, providing needed offensive balance that was a question mark heading into the season. This year, he’s one of the key pieces of an attack that many expect to be among the best in the nation.

Hill figures to be even more difficult to bring down than he was a year ago. He told The Oklahoman that he’s added about 15 pounds to arrive at 195, and hopes to keep adding more. Offseason shoulder surgery kept him out of spring practice, but he got back to work during the offseason. In July, video surfaced of Hill squatting 565 pounds.

Hill sliced through the Texas defense on the very first drive, rumbling 30 yards for the game’s opening score. He ended up with 135 yards on 25 carries — a career high at the time — in the Cowboys’ 49-31 rout.