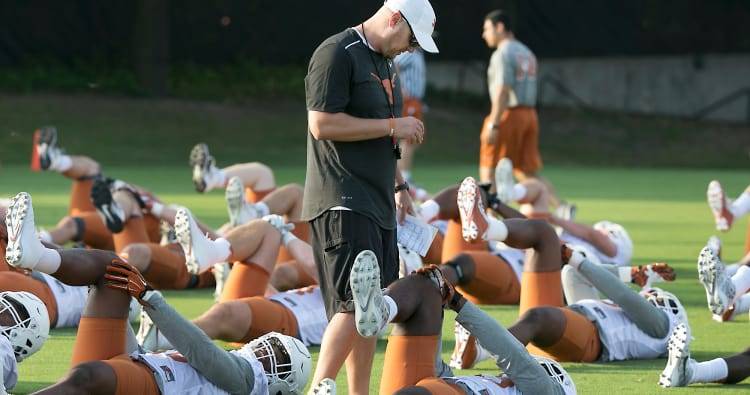 Nearly three full weeks into a rugged training camp, the Longhorns are showing serious wear and tear. The lack of quality depth is readily apparent.

This cake, as former coach Charlie Strong indicated, is nowhere near fully baked.

New coach Tom Herman may feel good about his 22 starters. But asked Thursday if he had 22 capable backups, he said, “No. Oh my gosh, no. But I don’t know that anybody does.”

Herman said the numbers get skewed because the Longhorns have oodles of receivers. It’s the team’s deepest, most talented position unit. What about everywhere else?

In Strong’s final public appearance as UT’s coach last November, he proclaimed, “The cake has been baked. The only thing you need to do now is put the icing on it and slice it.” It was his firm belief the Longhorns were poised for a breakout 2017 season, although Strong knew he wouldn’t be around to see it.

Strong’s comments implied that he felt the roster was fully stocked. Texas appears to have solid first-team units loaded with experience. But there doesn’t appear to be enough firepower to comfortably fill out a complete two-deep roster.

Take tight end, for example. Andrew Beck is now out 6-8 weeks with a broken foot, and freshman Reese Leitao will be suspended the first two games for pleading guilty to misdemeanor drug possession this summer. “Maybe one of these guys — Garrett Gray, Kendall Moore or Cade Brewer — prove to us that they deserve to be on the field quite a bit, so we’re giving them every opportunity to do that,” Herman said.

Projected starting right tackle Elijah Rodriguez, who started at three different positions last season, has already been ruled out with an ankle injury and has undergone surgery. He was playing right tackle mostly because Tristan Nickelson or Denzel Okafor couldn’t win the job outright. Asked about Okafor on Thursday, Herman said, “He’s not there yet, but he’s definitely improved from where he was last week.”

Also on Tuesday, sophomore offensive lineman Jean Delance announced he was transferring. He played in two games last season and was thought to be developing. That chips away at UT’s offensive line depth even more.

Meanwhile, over at running back, Chris Warren III missed several practices with a concussion and Kyle Porter (shoulder) likely won’t be cleared for full-contact work until next week. Freshmen running backs Toniel Carter and Daniel Young were both called out by coaches before last Saturday’s scrimmage even started. “That’s never a good thing,” Herman said afterward.

The coaching staff is already holding its breath at quarterback having been unable to land a graduate transfer. If either Shane Buechele or Sam Ehlinger get seriously hurt, the Horns will likely pull receiver Jerrod Heard back over to quarterback as a “nuclear option.”

The defensive depth is thin, too. Several linemen left the program during the offseason. As of now, Malcolm Roach and Charles Omenihu are the only two experienced defensive ends, and Roach is battling turf toe.

Herman loves defensive tackle Poona Ford in the middle. “If we can get 11 guys playing like Poona Ford on defense, look out,” he said. Chris Nelson continues to be steady, and Gerald Wilbon and D’Andre Christmas are looking for breakout sophomore seasons. Everyone else is too raw or unknown.

One player who has turned heads this August is freshman defensive tackle Ta’Quan Graham. He was the first newcomer to have the red stripe removed from his helmet, indicating he’s grasped the defensive scheme.

But there’s been little or no buzz about Gary Johnson, ranked as the nation’s fifth-best junior college recruit by 247Sports. The coaching staff hasn’t really talked up Breckyn Hager, Edwin Freeman or Demarco Boyd, either. At most, Herman said Hager was “a situational guy right now,” or an extra pass rusher on third downs.

In the secondary, P.J. Locke III is a clear-cut starter, as is cornerback Kris Boyd. But can Davante Davis or Holton Hill find consistency? Brandon Jones and DeShon Elliott are veterans now. Can they get better?

Of course, the Longhorns are in the dog days of training camp. There’s still more than two weeks left before the season opener against Maryland. Herman said by the end of this weekend’s scrimmage, “Whether you like it or not, that’ll be who we are.”

Right now, the Longhorns are a team that can’t afford any more injuries. This cake isn’t ready.