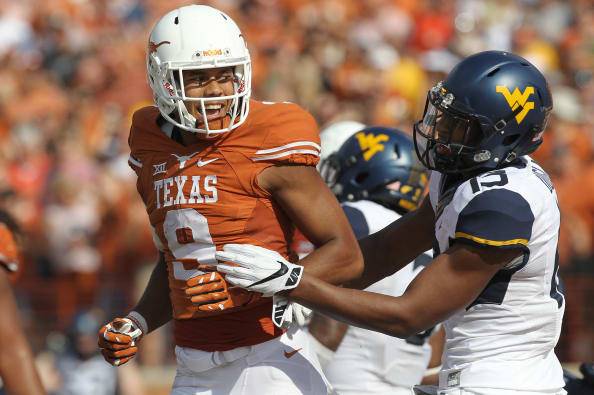 In two weeks, Texas receiver Collin Johnson might find himself being covered by Maryland defensive back JC Jackson. Meanwhile, Longhorns cornerback Kris Boyd could be flanking a receiver like D.J. Moore.

Until then — as the countdown to the college football season slowly winds down — Johnson and Boyd have each other.

In practices and scrimmages this month, Texas coach Tom Herman has not shied away from first-string battles. That has left Boyd, a junior who recorded 51 tackles and five pass breakups last year, in coverage against Johnson, the sophomore with 28 career receptions.

In Johnson, Boyd gets to practice against a 6-6, 220-pound receiver with an All-American bloodline. (Johnson’s father, Johnnie, was an All-American defensive back at Texas). Johnson recorded 15 of his catches and all three of his touchdowns over UT’s final four games of 2016. He then tallied eight catches, 117 yards and two scores in UT’s spring game.

In Boyd, Johnson gets to run routes against a cornerback that UT assistant coach Jason Washington said has the potential to be a lockdown defender who is “very, very successful if he’s consistent.” Forty-five of Boyd’s tackles last year were solo stops. He also sealed a win against Texas Tech with an end zone interception, the first of his career.

Boyd gives up six inches and 20 pounds to Johnson, but he said that the two are “going to work to get each other better every day.” Johnson has asked Boyd for critiques and advice while watching film, and the receiver has returned the favor. Both players have savored the competition.

“It’s business out there, it’s competition and we don’t take it to the locker room,” Johnson said. “Out there, we’re going to compete.”

On Tuesday, Johnson took a diplomatic approach when asked who won the battle with Boyd during the past weekend’s scrimmage.

Kris, is that how you saw it?

“That is what it is,” Boyd replied.

Johnson is not the only teammate that Boyd has lined up against in practice. Earlier this week, senior receiver Armanti Foreman tweeted out photos of he and Boyd exchanging blows during drills. Wrote Foreman, who led UT last year in receptions (34) and receiving yards (420): “Now that I know who you are, I have a greater understanding of who I am!”

Now that I know who you are, I have a greater understanding of who I am! Now I think this is the part where we shake hands 🤝 – Unbreakable. pic.twitter.com/egRrKJph6x

Boyd shares an admiration and respect for the UT receivers. He’s even willing to root for them at his expense. The always-chatty Gilmer product said he is usually one of the first ones on a receiver if a ball is dropped during practice.

“Anybody I see drop a ball that should have been caught, I’m like, ‘Hey, even though I’m on defense, you’ve got to have that,’” Boyd said. “I know that’s going to be in a game, we need him to catch that ball.”

The post Texas teammates Collin Johnson and Kris Boyd find worthy adversaries in each other appeared first on HookEm.