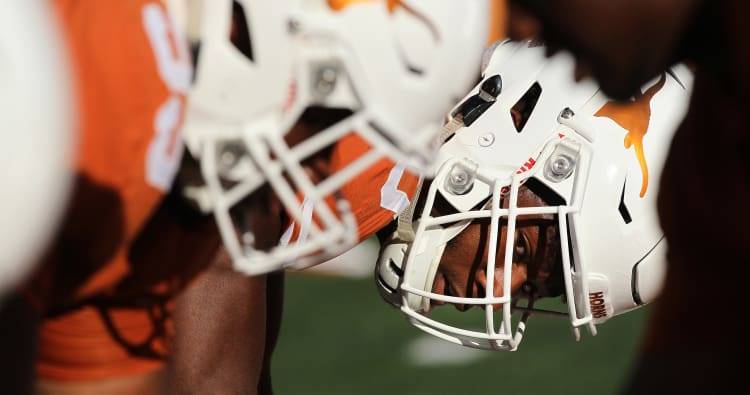 1. Hughes started his junior year off with a bang in the double-overtime win over Notre Dame. He had two tackles (both solo), a pass breakup and blocked a field goal late in the third quarter. It had been 30 games since a Longhorn had blocked a field goal, going back to Jackson Jeffcoat against Kansas in 2013.

2. He led the team with 10 tackles (seven solo) against Texas Tech in 2015, adding 1.5 sacks and a quarterback pressure. That remains his career single-game high for tackles.

He started three seasons at Harker Heights but after splitting time at safety and linebacker, it wasn’t sure where he’d fit best in terms of a college scheme. He also played some offense early in his varsity career.

Hughes was a productive player. He earned first-team all-district honors as a senior after recording 74 tackles, seven sacks and two fumble recoveries. Nineteen of those 74 tackles were for loss. He played in the 2013 Semper Fidelis All-American Bowl.

WHO HUGHES HAS BEEN HERE — SO FAR

Hughes redshirted in 2013 but earned immediate playing time as a redshirt freshman in 2014. He started seven times that season, playing in all 13 games of Charlie Strong’s first season, splitting time at linebacker and defensive end.

Hughes appeared to figure it out as a sophomore and became one of the team’s most prolific pass rushers. He started all 12 games and was a centerpiece on special teams. He recorded a team-high nine tackles for loss and was second on the team with 5.5 sacks. He finished the year with 57 tackles.

He only started seven of 12 games in 2016 as he struggled to adapt to a new position. Hughes finished the year with 24 tackles and 3.5 sacks.

As a fifth-year senior — and one of the three remaining ties to Brown’s final team at Texas — Hughes must provide leadership and sacks if the defense wants to improve on last year’s ghastly numbers (31.5 points per game, which ranked 90th in the country). Hughes is coming off a season in which he registered 3.5 sacks, but head coach Tom Herman still said during fall camp that Texas needs more production from him in that category. (Herman added that Hughes has been impressive with his play against the run). Texas wants to employ starters on special teams, so Hughes, who blocked a kick last year against Notre Dame, should also be a fourth-down presence this fall.

The post The Texas 22: Starting at outside linebacker — Naashon Hughes appeared first on HookEm.