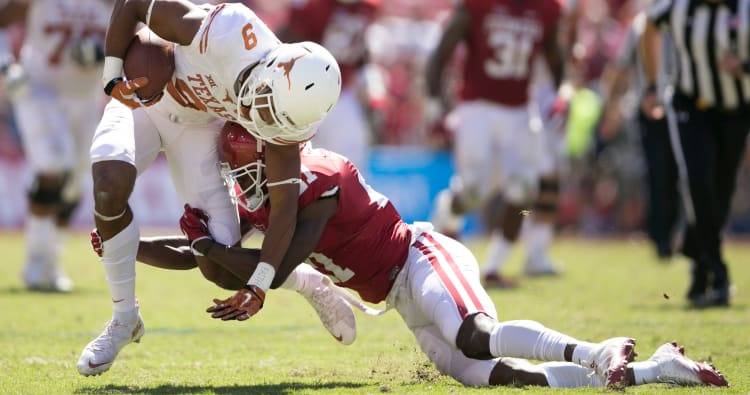 1. Can’t top what he did in Lubbock last year, at least so far. Johnson had four catches for 47 yards and two touchdowns — the first two of his career. He became just the sixth freshman in school history to catch two touchdowns in the same game, and the first to do it since 2008.

2. In terms of career highs, however, Johnson’s best statistical game was against West Virginia: Seven catches (a career high) for 68 yards (also a career high). He also caught a touchdown, his third of the season which moved him into a tie for second place all-time among Texas freshmen.

3. Do spring games count? Johnson was one of the big story lines that emerged from April’s Orange-White game, going over 100 yards and catching two touchdowns.

Johnson is a legacy Longhorn. His father, Johnnie Johnson, was an All-American defensive back for Texas in the late 1970s. Collin always was likely to end up in Austin. His older brother Kirk was a three-star running back who signed with UT one year before he did, in 2015. But it was Collin, a four-star prospect, who possessed the higher ceiling because of his 6-6 frame and raw athleticism.

He was the country’s No. 44-ranked wide receiver prospect and No. 210 overall, per 247Sports’ composite ratings. He was the 29th overall ranked prospect in the state of California in 2016.

WHO JOHNSON HAS BEEN HERE — SO FAR

The transition from high school receiver to college receiver is larger than most realize because of the speed and physicality of college defenders and because of the complexity of modern-day offenses and defenses. Not many prep receivers — especially those who are 6-6 — need to run option routes. Johnson struggled with that his freshman year; he started only one game despite seeing spot action in all 12 games.

Still, Johnson did show flashes of future brilliance, such as his big day at Texas Tech. He finished the season with 38 catches for 315 yards and three touchdowns, which tied for the team lead.

He solidified his spot as Texas’ next No. 1 receiver by putting on a show at the Orange-White game in April, when he led the team with eight catches for 117 yards and two touchdowns.

Simply put, a superstar. When Johnson met reporters earlier this week, it was clear he’s got a more chiseled frame. That was likely a high offseason priority after being challenged by receivers coach Drew Mehringer to be more physical. “In the spring I told him I didn’t think he had the physical toughness top lay this position at an elite level,” Mehringer said. “He’s on a mission to prove me wrong.”

Johnson didn’t have a problem with being called out. “I’m not scared of a challenge, personally,” he said. “I don’t want someone to lie to me. If that’s how he feels, so be it. I would like him to tell me how he feels so I can improve as a player, because that’s what it’s about each and every day.”

The door is wide open for Johnson to catch as many passes as he wants. He has a good relationship with quarterback Shane Buechele and this coaching staff wants him to succeed. It’s all up to him.