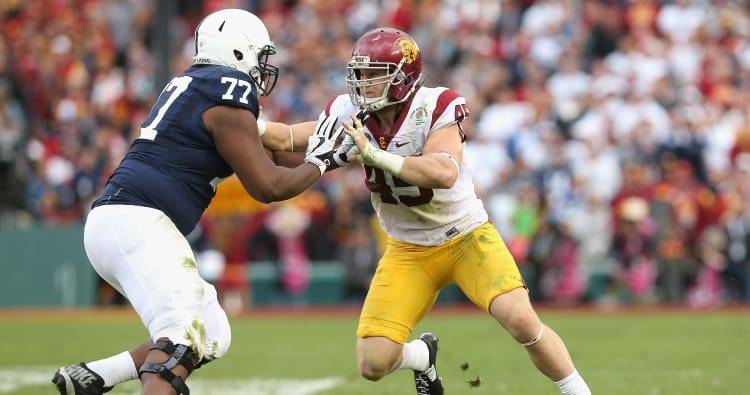 Everyone knows that guy who basically lives in the weight room. “Gains are life,” he says in between sets of squats and mouthfuls of protein shakes. USC linebacker Porter Gustin is that guy, and he’s coming for your quarterback.

The 6-foot-5, 260-pound outside linebacker was a huge part of the Trojans’ turnaround last fall, finishing with 68 total tackles, 13.0 tackles for loss and 5.5 sacks. While the offense gets a lot of the shine, linebacker could be the strength of this very good USC team. You’ll find one more later on this list, and many also expect the Trojans’ other outside linebacker Uchenna Nwosu to be nearly as good as Gustin.

Yogi Roth provides an excellent breakdown of Gustin’s game in the above video. That was before he had a pair of sacks in the Trojans’ win over No. 4-ranked Washington. That game was a showcase for the USC defense, Gustin included. He acts as a de facto defensive end in a 3-4 system, but as you can see in the highlights he has no problem chasing running backs to the edge.

The post Top opponents for Texas in 2017, No. 15: USC LB Porter Gustin appeared first on HookEm.

The Texas 22: Starting at outside linebacker — Naashon Hughes