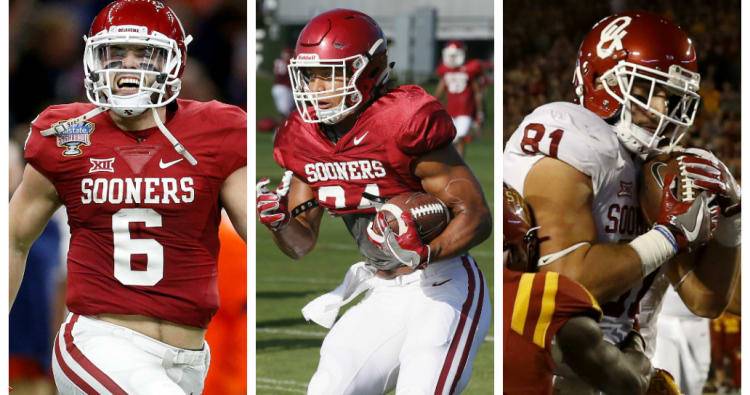 Oklahoma may have the best quarterback in the country with Mayfield. He finished third in last year’s Heisman race and led the Sooners to the national semifinals in 2015. He’s started since his freshman year, back when he was a walk-on at Texas Tech.

But a quarterback can only do so much without a solid supporting cast. The Sooners lost both Samaje Perine (the most prolific rusher in school history, now a Washington Redskin) and Joe Mixon (Cincinnati Bengals). Receiver Dede Westbrook (Jacksonville Jaguars), also a Heisman finalist a year ago, has moved on as well.

New coach Lincoln Riley, who was elevated when Bob Stoops retired in June, likely will use a rotation at tailback.

Anderson is the favorite to start. He missed all of last season because of a neck injury. And he missed most of 2015 with a leg injury. Anderson has all of one career carry. He wasn’t allowed contact during spring workouts, so coaches are just now seeing what he can do.

Riley also has been impressed with freshman Trey Sermon, telling reporters: “He has a lot of qualities that remind you a lot of Samaje. I’m not saying he’s Samaje, but his consistency and his attitude and mentality rarely fluctuates, which is rare for a guy as young as he is. They’ve been impressive. It’s a good group. I’d imagine that we’d use all of them.”

The top returning receiver is Andrews, a tight end. He’s been an all-conference selection for the past two seasons but OU needs a dynamic receiver to make the offense go. The best receivers could be transfers.

Jeff Badet led the SEC in yards per catch last year when he played for Kentucky. He joined the team this summer. Marquise Brown, a junior college transfer, went through spring practices in Norman. Brown was ranked as the third-best JUCO receiver nationally by 247sports.com.

The post Triplets of the Big 12: Oklahoma appeared first on HookEm.