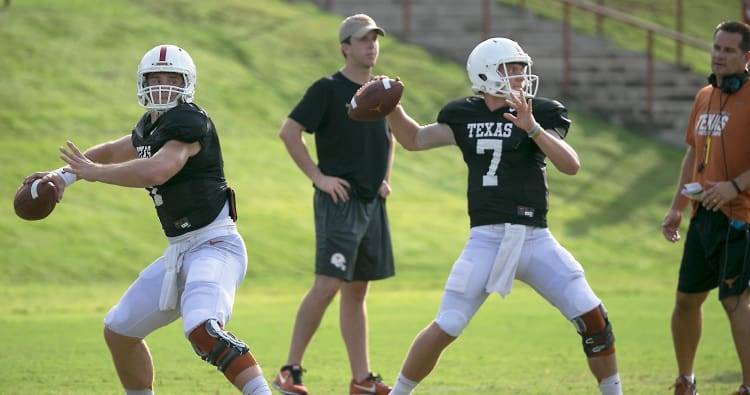 Texas coach Tom Herman spent the entire offseason instilling a culture of winning. Everything was a competition. You were either a winner or a loser, one who dined on surf-and-turf or baloney.

Now comes the results from all that scorekeeping.

The Longhorns are likely to firm up their depth chart this weekend after Saturday’s third scrimmage of training camp. Beginning Monday, Herman will start preparations for the season opener against Maryland. If players haven’t shown their talents by now, it’s likely too late for the coming months.

Starting next week, the first-team units will go more against the second-team squad and vice versa. There is likely to be less full contact and less tackling as the Horns get ready for the Terps on Sept. 2.

“I told our coaches (Friday) in our meeting, there should be no surprises on Monday when those kids go to their respective areas to go to,” Herman said. “Some kids, it’s yes sir, I get it and figured as much. Some kids, it’s like what are you talking about and they have a distorted sense of reality.”

Herman has already warned that some scholarship players will land on the scout team. For some, that may be unacceptable. Sophomore offensive tackle Jean Delance announced last Tuesday he was transferring out.

It’s unclear when UT will publish a depth chart. Under former coach Charlie Strong, the school did not release a depth chart until the Monday of game week.

“When we won the national championship at Ohio State, that scout team defense was awesome. I mean, awesome,” Herman said. “It was full of a bunch of guys that went on to have great careers and get drafted and all that stuff. Every player on this team has a role and if embraced properly, that role can help us win.”

Still Buechele?: For the third straight week, the defense won the intrasquad scrimmage. What does that say about UT’s quarterback situation?

“We’re not dynamic there,” Herman said. “It’s not Vince Young. It’s not Braxton Miller. But we’re good enough to win with.”

Herman stopped just short of naming sophomore Shane Buechele the starter over freshman Sam Ehlinger. Buechele threw for nearly 3,000 yards last season and played all 12 games. Ehlinger was a mid-term enrollee from Westlake who has never played at the collegiate level.

“That’s a big deal, huh?,” Herman said. “I’ve said over and over again that if we played a game tomorrow, Shane Buechele will start. We’ll get a depth chart to make it Facebook official. Is that what we’ve got to do?

Third-down rush: Herman was asked if someone performing well or poorly that reporters haven’t asked about. “The equipment managers?,” he said.

After thinking about it, Herman brought up two names he hasn’t mentioned much during camp — linebackers Breckyn Hager and Jeffrey McCulloch. Both may come on as extra pass rushers in passing situations.

“I wish they would play better on first and second down,” Herman said, “but I’m excited to turn those guys loose on third down and see what they can do.”

Rotating tackles: Herman said right tackle candidates Tristan Nickelson and Denzel Okafor will likely rotate during games, an indication that neither can win the job outright. Or, as Herman said, the two will rotate “barring any super take off by one of the guys or super collapse by another.”

“You’d rather have one great one than two average to above-average ones, and continuity would always be good,” the coach added. “But the silver lining is they both heeded the challenge of competing for it.”

Nap time: Safety Brandon Jones admitted on Friday that some players were sleeping inside the football building during training camp. The coaching staff brought in dozens of inflatable mattresses. Asked who snores, Jones said, “P.J.’s horrible.”

No word on whether cornerback P.J. Locke III agrees.

“That was organic with the kids,” Herman said. “When we moved into Jester (Center), a lot of the kids said, ‘Coach, sleep is at a premium. If I can save myself the eight-minute walk to Jester and the eight-minute walk back, that’s 16-20 minutes of extra sleep. Can we just sleep here?’ Of course, the answer’s yes.”

Cuffee injured: Cornerback Eric Cuffee had an interception during Saturday’s scrimmage. But the euphoria was gone after he had to leave practice with a wrist injury. No timetable was given for his return.