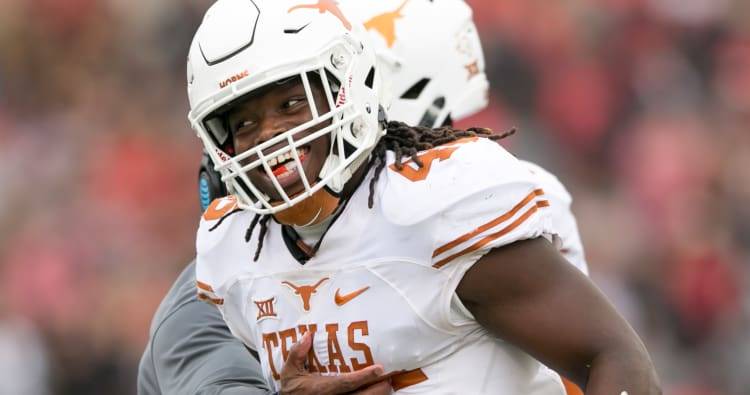 1. It took Jefferson all of two games to make an impact as a Longhorn. In the second game of the 2015 season, he led the team with nine tackles (six of them solo), including one tackle for loss, while setting a season high with four quarterback pressures and returned a Rice fumble 26 yards for a touchdown.

2. Jefferson’s best game so far started out with him watching from the sideline. Charlie Strong held him out of the starting lineup last year against Baylor. But once he did get in, he responded with a team-high 10 tackles and two sacks and he tied his career high with 2.5 tackles for loss. Texas upset No. 8 Baylor at home.

3. Jefferson’s first college game came in the 2015 season opener at Notre Dame in prime time. With that kind of stage, he opened his career with nine tackles and a season-high 2.5 tackles for loss.

Not many recruits have stepped onto Texas’ campus with more fanfare than Jefferson, a five-star recruit from Mesquite Poteet who held 32 offers. He chose Texas late in the cycle over Texas A&M, one of Charlie Strong’s top recruiting wins over Kevin Sumlin and the Aggies.

Jefferson was the No. 10-ranked overall prospect in the country and the No. 1-ranked linebacker in the 2015 class, per 247Sports’ composite. He had 12 sacks his senior season and was named a first-team All-American by USA Today. In his high school career, Jefferson recorded more than 270 tackles and registered 49 tackles for loss, 31 sacks and six fumble recoveries.

He was the headliner of Strong’s 2015 class, which ranked 10th in the country and No. 1 in the Big 12. The class included projected starters this year in running back Chris Warren III, left guard Patrick Vahe and cornerbacks Holton Hill and Kris Boyd.

WHO JEFFERSON HAS BEEN HERE — SO FAR

Jefferson is entering his third season as a starting linebacker and he’s yet to live up to the massive expectations that were placed upon his shoulders.

Jefferson, an outside linebacker in high school, was forced to play middle linebacker for a bulk of his snaps over his freshman and sophomore seasons. A change to the outside, which is expected this fall, should allow his athleticism to shine more than it did at Mike linebacker.

He’s played in 22 games and has started 18 of them. He was strong from the start, starting nine games as a freshman and finishing second on the team with 61 tackles. He was named the Big 12’s defensive freshman of the year and was an honorable mention all-conference selection. He was the 2016 Big 12 preseason defensive player of the year but ended up as a second-team selection. He was third on the team with 62 tackles and had 8.5 tackles for loss. He was a Butkus Award semifinalist.

Butkus Award? Check. Nagurski Trophy? Check. Bednarik Award? Check. Jefferson has been featured up on the watch lists for each of those awards and he was recently placed on the Big 12’s preseason all-conference team. Texas fans would really like Jefferson to live up to that hype, and he feels you. Said Jefferson earlier this month: “That’s one thing that kind of irritates me. I look at all that stuff and I know that they’re watch lists and stuff, but moving forward I want to be able to show that I am those type of players.” Jefferson has said he feels comfortable rushing the passer and playing in coverage, and UT can definitely use that versatility on defense.

The post The Texas 22: Starting at outside linebacker — Malik Jefferson appeared first on HookEm.