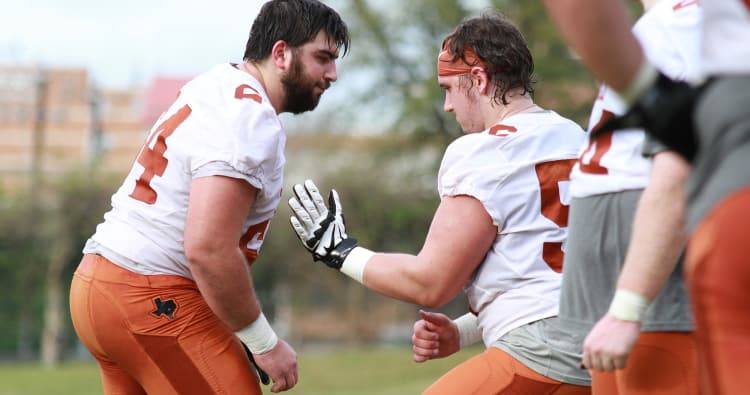 2. He’ll leave Texas as a guard, but he started out as a Longhorn as a defensive lineman. He’s got three career tackles. Two of them came in one game — in 2015 against TCU.

3. McMillon’s versatility has been a real key for the offensive line. Last year he played two games at center when Zach Shackelford went down with an injury. Against the Cyclones he helped the offense put up 505 yards and 24 points in the second half in a Texas victory.

McMillon wasn’t a star signing in the 2014 class, Charlie Strong’s first at Texas. Back then he was a 6-3, 240-pound three-star prospect with only four reported offers. He committed to Texas in the spring semester of his junior year — on April Fool’s Day.

He wasn’t a class headliner, but he did have an outstanding high school career. McMillon was a four-year starter at Abilene, the first freshman to start on varsity there since the 1990s. He was an all-district selection as a defensive end his senior year, recording 43 tackles, four tackles for loss and a sack. He had 14 sacks as a junior.

WHO MCMILLON HAS BEEN HERE — SO FAR

It takes time for offensive linemen to adjust to the strength and athleticism of college defenses. It understandably took McMillon extra time because of the position change and the amount of weight he needed to gain.

It all started coming together for him as a sophomore in 2016. McMillon started five of the 10 games he played in, including wins over Baylor and Texas Tech. The offense put up historic numbers in the season with Shane Buechele setting freshman passing marks and D’Onta Foreman rushing for more than 2,000 yards.

You can make the argument that McMillon is the most versatile player on the Texas roster. Think about it. He’s played 22 career games and has played center, guard and tackle in a pinch over the last two years.

“Well he’s not underrated by me; I really like being around him,” coach Tom Herman said. “He is versatile, very much so, in terms of his ability to play center and guard; really smart guy, powerful, so he’s able to hold his own inside there with the Poona Fords of the world, and I don’t know that underrated is the right word, but certainly very versatile.”

McMillon is likely to be the team’s starting right guard, but he’s almost interchangeable with Zach Shackelford at center. If those two had to change positions for whatever reason, they likely could. McMillon is just a dependable, every-day player.