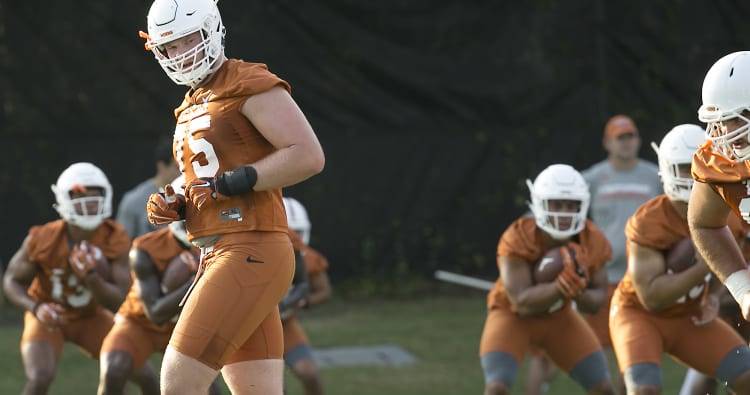 1. Some of his best work on the line has come in the annual Oklahoma game. In 2015, no Sooners opponent rushed for more yards against them than Texas did, with 313. Nickelson and his fellow linemen were so solid that day, they collectively were named offensive MVP for the game.

2. Nickelson made his 2016 season debut against Oklahoma, missing the first month-and-a-half with an injury. He stepped into the starting right tackle spot, which is where he’s slated to start this season as well. Texas scored 27 points in the second half, with 245 passing yards and 180 rushing yards.

Nickelson took a long route to Texas. He started his prep career at Clear Springs before moving to newly opened Clear Falls in League City. After high school he wound up at Fork Union Military Academy for a year before transferring to Navarro College, a JUCO program within Texas. He helped Navarro to a playoff appearance in 2014 and ranked as the No. 150-ranked JUCO prospect in the country.

Nickelson comes from strong stock. His dad, Ron, was an offensive lineman for TCU in the mid-1980s. His mother was a volleyball player at Texas A&M. Nickelson chose Texas over offers from Iowa State, North Texas and Louisiana-Monroe.

WHO NICKELSON HAS BEEN HERE — SO FAR

Texas was never known for JUCO transfers under Mack Brown. When Charlie Strong took over, the program lacked depth at nearly every position but especially on the offensive line. Nickelson arrived before the 2015 season and made an immediate impact on the depth chart. He played in the final nine games, starting three times. He started two games at right tackle and the other at left guard. Texas ranked 18th nationally as a team in rushing that season.

It was an up-and-down junior year for Nickelson, as it was for most players in the program. He played in eight games and started against Iowa State, Kansas State and Baylor. He suffered an injury early in the season and didn’t make his first appearance until the Oklahoma game. He’s a two-time member of the Big 12 Commissioner’s Honor Roll.

Nickelson is the first player you want getting off the bus to intimidate the other team. He’s 6-10 and looks every bit the part of a starting right tackle for a major college powerhouse. But he’s been inconsistent at times, so much so that he hasn’t earned the coaching staff’s complete trust yet.

“Tristan’s is physically limited at times, because of how long a levered guy that he is,” coach Tom Herman said. “He gets his body out of position at times but he’s always in the right spot, he’s always on the right person, it’s just executing at the point of attack. I think he’s gotten better and will continue to get better at that.”

Nickelson has played in 17 games with six career starts. This is his last chance to show what he’s got. When Texas lost Elijah Rodriguez — the Longhorns’ projected starting right tackle — to an ankle injury, the door opened for Nickelson. He must walk through it and take advantage of his opportunity.