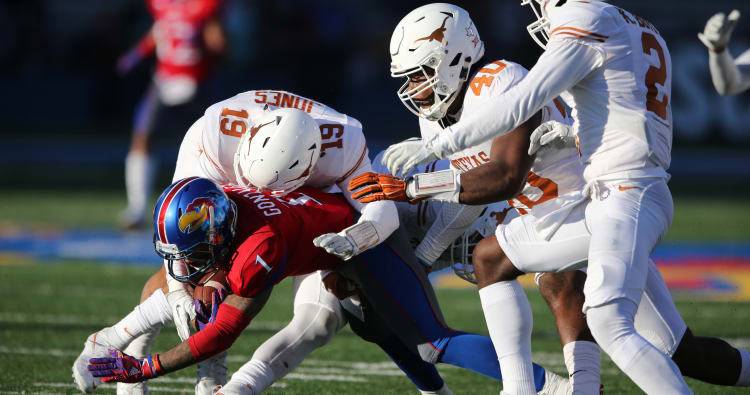 1. Jones’ top three highlight moments all followed each other in a three-game span last year. In a win over UTEP, Jones blocked a punt in the first quarter. It was the first blocked punt by the Longhorns since Carrington Byndom blocked one in 2012. Jones also had two tackles.

2. In Texas’ next game, against Cal, Jones blocked another punt, making him the fourth Longhorn in school history to block a punt in back-to-back games. Aaron Williams is the single-season record-holder, with four. Jones also had a special teams tackle.

3. Jones is expected to start this season, but so far he has only one career start under his belt — against Oklahoma State. He had one tackle in the game and the Longhorns lost. Still, you’ve got to start somewhere.

Jones was the second-highest rated member of Texas’ 2016 class, trailing only wide receiver Devin Duvernay. Jones was a four-star safety out of Nacogdoches who ranked No. 3 on the 2016 Fabulous 55, trailing Gregory Little (Texas A&M) and Patrick Hudson (Texas). The 5-10 defender was known as a hard-hitting safety with cornerback coverage skills during his prep career.

He ranked as the No. 42-ranked overall recruit in the nation and the No. 1 safety, per 247Sports’ composite ratings. Texas’ 2016 class ended up ranking No. 7 in the country and No. 1 in the Big 12. Jones was the District 16-5A defensive player of the year as a senior after recording 124 tackles and two interceptions.

Jones missed most of his junior season due to injury. His sophomore year showed glimpses of his future potential. Jones finished with 95 tackles, five interceptions and eight pass breakups. As a senior he participated in the Under Armour All-American Game.

Jones didn’t commit till signing day. Texas A&M’s Kevin Sumlin visited Jones himself in Nacogdoches right before signing day, on Jan. 27. The next day, Charlie Strong was in Nacogdoches, too.

WHO JONES HAS BEEN HERE — SO FAR

Jones found his way into all 12 games as a freshman, his lone start coming against Oklahoma State. His biggest contribution was as the special teams’ ace. He finished the season with only 16 tackles but he did register two blocked punts.

Jones was more physically gifted than the safeties starting in front of him for most of 2016. To improve as a sophomore, he must improve and become consistent. He lacked that at times as a freshman, routinely taking bad angles and missing a few key tackles.

Jones was a standout in football and track in high school, but UT safeties coach Craig Naivar used a couple of baseball analogies when talking about the sophomore safety earlier this month. Naivar said Jones could cover a lot of ground in the secondary, adding “If that guy played centerfield, he’d make a whole lot of money.”

Jones, though, has only one start in his career, so Naivar said he needed to adopt the mindset that “you’re not a reliever, you’re a starter.”

Jones’ two blocked kicks were bested by only four FBS-level players last year, but don’t expect his role on special teams to be lessened by this starting assignment. Texas has stated that it will use its starters on special teams.

The post The Texas 22: Starting at safety — Brandon Jones appeared first on HookEm.