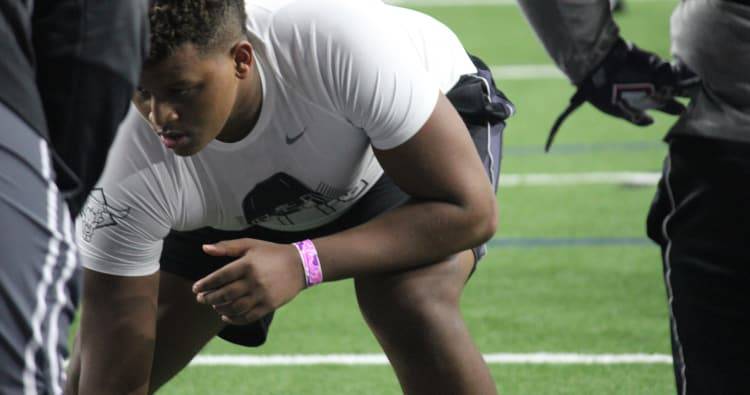 Texas’ 2018 recruiting class grew to 18 members Monday afternoon when Frisco Wakeland offensive tackle Rafiti Ghirmai chose the Longhorns over a host of offers, including UCLA and Alabama. Ghirmai is a four-star prospect who ranked No. 33 in the recently updated Fabulous 55.

Ghirmai is the second offensive lineman to join Tom Herman’s 2018 recruiting class. Reese Moore, an offensive tackle from Seminole, was the program’s lone offensive line commit since April. Ghirmai stands at 6-foot-4 and 290 pounds, meaning his capable of playing offensive tackle and guard at the collegiate level.

I’M 110% COMMITTED!!(videocreds:@SuperK_TFB & @Andrew_TFB)@simplyCoachO. Thank you to all my family and friends for getting me to this point pic.twitter.com/hiYDBxMRfI

Skill set: Ghirmai is a diverse and athletic offensive tackle who made solid showings at The Opening regional in Dallas and at the Under Armour All-American Camp Series. He’s a big player with enough strength to bully most prep defensive ends. He’s also quick enough on his feet to compete with blitzing linebackers and speed rushers off the edge.

Ghirmai was a second-team all-district performer as a junior. He watched his stock soar during the offseason, picking up a Texas offer Jan. 24 when he only held 10 other offers. Seven months later, Ghirmai holds more than 30 offers from elite programs around the nation.

He plays offensive tackle in high school and was recruited to play the same position at Texas. His 6-foot-4 frame is a bit on the short side for elite college offensive tackles, which might mean Ghirmai moves to guard or center by the time his Texas career ends. Ghirmai is a similar prospect to 2017 signee Derek Kerstetter.

Immediate impact: Offensive lineman rarely make an immediate impact at the college level because of the sheer size and athleticism of collegiate defensive players. It’s tough to ask someone three months removed from Prom to block a 21-year-old defensive end who has been in college strength and conditioning program for years.

Ghirmai is not physically ready to compete at the Big-12 level. He’ll need to replace some bad weight with muscle and continue to improve his lower-body strength and flexibility. Texas’ lack of depth along the offensive line could cost Ghirmai a redshirt season, but he’d benefit greatly from a year of learning and working out.

Fitting into the program: Ghirmai’s personality should mesh well inside Texas’ program. He’s a no-nonsense, quiet kid who would rather be playing football than talking about playing football. He’s also a uniquely thoughtful and intelligent teenager. Ghirmai is a worker and Herman and his staff want grinders on the offensive line. Ghirmai can play multiple positions along the offensive line and versatility is another trait the current Texas staff searches for in prospects.

Recruiting at the position: Ghirmai’s commitment puts Texas in great shape at offensive tackle. He joins Reese Moore, a fellow offensive tackle prospect, as the two offensive line commitments in the 2018 class. Texas wouldn’t mind adding a true interior lineman to the duo before national signing day. A name to watch is current LSU commit Chasen Hines, who considered Texas a co-leader with the Tigers before choosing LSU in the spring.