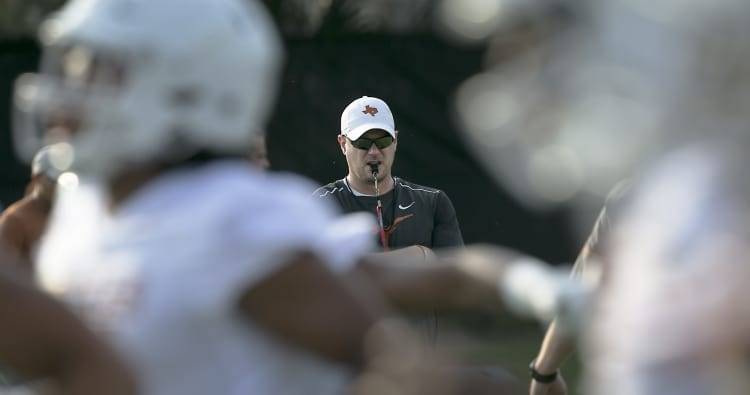 Texas coach Tom Herman’s attention to detail knows no bounds. He was even prepared for Monday’s solar eclipse.

“We advised them don’t freakin’ look at the damn thing,” Herman said Monday, about 90 minutes before the moon passed in front of the sun.

Staring into the Associated Press Top 25 preseason poll may burn your eyes, too.

Despite three straight losing seasons, the Longhorns will still start the year ranked 23rd. It’s the first time Texas has made the preseason AP poll since 2013.

Asked if this was indeed a top-25 caliber team, Herman shook his head.

“No, we’re a 5-7 team. You are what your record says you are,” Herman said, echoing the famous Bill Parcells line. “We haven’t played a game yet. So, we’ll pay attention to those as we head down the stretch. But right now, it’s just a bunch of people guessing, right?”

The Horns went from unranked to No. 11 after the 2016 season-opening win over Notre Dame. But Charlie Strong’s group drifted lower in the following weeks and fell out of the poll completely after a 2-2 start.

Now the program is enjoying the Herman bump. The new coach went 22-4 in two seasons at Houston and 6-0 against ranked opponents during that span. Pollsters clearly are betting that he can spark the same kind of quick turnaround in Austin.

Delance to Florida: Offensive tackle Jean Delance announced last week he was leaving Texas, but it didn’t take him long to find a new home. The sophomore announced on Twitter he’s transferring to Florida.

“Blessed & proud to announce I’ll be continuing my education and football career at The University of Florida!!!,” Delance tweeted.

Delance was likely to be on the scout team with the Longhorns. All-American Connor Williams is the projected starter at left tackle, and Herman said Monday that senior Tristan Nickelson will be the likely starter at right tackle.

Brown is expected to be sidelined four-to-six weeks. “It could be a couple of games,” Herman said, “it could be three or four.”

Watching Porter: Herman said running back Chris Warren III would be the likely starter against the Terps. However his answer about Warren’s backup shed some light on a possible trouble spot. Kyle Porter, who is still being held to non-contact work with a shoulder issue, may not be at full-strength in two weeks.

“If for some reason Kyle couldn’t go, then it would be kind of a committee there for the second spot with Kirk (Johnson) going in first and Danny Young going in second,” Herman said. “We’d see if we needed a fourth guy.”

Briefly: After raving about the defense on Saturday, Herman said no player was dubbed a scrimmage MVP. … Of all the players that have bought into the new coaching staff’s methods, receiver Dorian Leonard may be the most transformative. “He’s a changed man,” Herman said. … The Horns are now into what Herman called a “mock game week” but classes do not begin until Aug. 30.