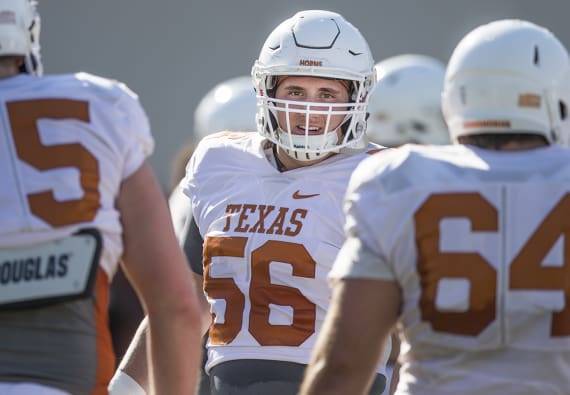 Shackelford was the lowest-rated member of Texas’ 2016 recruiting class. The Belton product wasn’t even ranked as a national athlete, checking in as the No. 52–ranked offensive guard in the cycle and the No. 132–ranked prospect in the state, per 247Sports’ composite. Fellow offensive linemen Patrick Hudson, Jean Delance, JP Urquidez and Tope Imade all signed in the 2016 class and were all rated higher as prospects than Shackelford.

The offensive lineman played for Bob Shipley, now a member of the Texas staff, at Belton. He was a four-year starter for the Tigers. Shackelford was a 12-6A all-district selection and a two-time all-state selection. He began his athletic career as a youth swimmer and his dad, Lyle, played college football for Central Florida.

WHO SHACKELFORD HAS BEEN HERE — SO FAR

Shackelford certainly wasn’t expected to be the most impactful offensive lineman of the 2016 class, but that’s exactly what happened when he forced his way onto the field as a center his freshman season. He finished the year as a FWAA freshman All-American and honorable mention All-Big 12 selection after starting nine games.

It is typically tough for offensive linemen to adjust to the college game because of the strength and athleticism of defensive linemen. Shackelford started in his first college game, snapping to fellow freshman Shane Buechele in an overtime victory over Notre Dame. He missed the second half of the Iowa State game with an ankle injury and did not play against TCU or Kansas.

Most observers were awestruck in 2015 when Connor Williams enrolled early and then started as a true freshman. That’s exactly what Shackelford did, too. He stepped onto campus and went straight into the starting lineup, earning freshman All-America honors.

He was an easy nomination to the preseason Rimington Award watch list as the nation’s best center. No Longhorn has ever won the award, which started in 2000.

Shackelford has always been rather athletic. He competed in the Junior Olympic swimming program as an 8-year-old and started playing football at age 9. He also lived in Ohio, Washington state and Germany before moving to Texas at age 13. This world traveler simply needs to stay put in the middle of UT’s line, and things will be just fine this fall.

The post The Texas 22: Starting at center — Zach Shackelford appeared first on HookEm.

Triplets of the Big 12: Oklahoma State