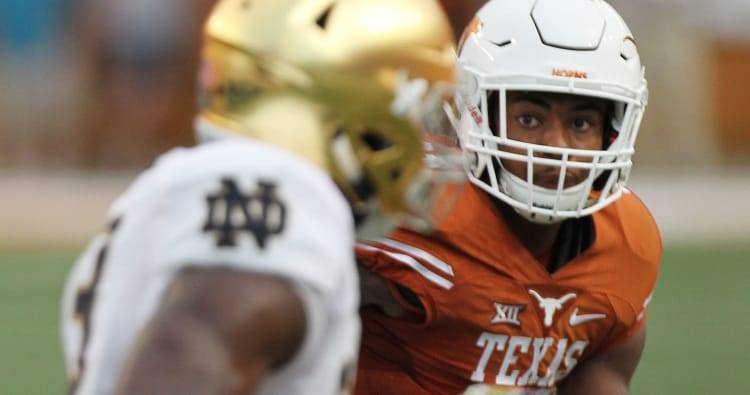 1. Two of Locke’s three best games have come against Baylor. As a freshman in 2015, he made his first career start in the final game of the season. Locke had a career-high seven tackles in Waco. He added a tackle for loss and forced a fumble that led to a touchdown drive and 17-0 lead.

2. In his very next game — the 2016 season opener, against Notre Dame — Locke had four tackles along with a sack and 1.5 tackles for loss.

3.His first career interception came against Baylor in 2016. He also had a fumble recovery in the 35-34 upset.

Locke was an unheralded signee in the 2015 class. The Beaumont Central product was the No. 598-ranked prospect in the nation and the No. 39-ranked safety in his class, per 247Sports’ composite. He was the No. 34-ranked player on the Fabulous 55.

Locke held 35 offers, choosing Texas over programs like Oregon and Baylor days before national signing day. He didn’t receive a Texas offer until Feb. 1 of the cycle, committed to Texas two days later and signed with the Longhorns on Feb. 4.

Locke was a three-year starter in high school, playing multiple spots on defense. As a senior he recorded 62 tackles, seven interceptions and 10 pass breakups. He returned one of those interceptions for a touchdown.

WHO LOCKE HAS BEEN HERE — SO FAR

Locke has already played in 24 games, starting 10, entering his third year. He played in all 12 games as a freshman, primarily in spot duty on defense or on special teams. He finished the year with 14 tackles, a pass breakup and a forced fumble.

He found his place as a nickel back during his sophomore season. He started nine games at the position. Locke recorded his first sack in the opener against Notre Dame and his first career interception later in the year in a win over Baylor.

With modern offenses, especially in the Big 12, playing multiple wide receivers nearly every snap, more than two cornerbacks are needed. Locke became a slot receiver specialist as a sophomore and should continue his upward trajectory as a nickel back in the coming seasons.

Two interceptions and six pass breakups while playing in a pass-happy conference resulted in an impressive statline last year for Locke, the former safety who has found his footing as a nickel. He had surgery to repair a sports hernia during the offseason, but that injury hasn’t slowed him during the fall camp. Texas should expect to get a lot of leadership out of the nickel back position this fall — fifth-year senior Antwuan Davis will be Locke’s backup and Texas has made it very clear that Locke will be looked upon as a leader. (Defensive coordinator Todd Orlando has even described Locke as a “senior-type.”)

The post The Texas 22: Starting at nickel back — P.J. Locke III appeared first on HookEm.