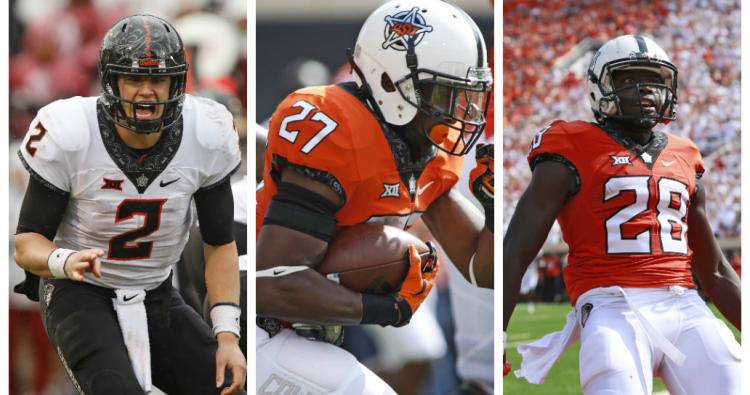 On paper, no one in the Big 12 can top Oklahoma State when it comes to skill players.

The Cowboys have a 4,000-yard passer, a 1,000-yard receiver and a 1,000-yard rusher returning for what could be a strong run for the national playoffs. Oklahoma would be the traditional choice to win the Big 12, but it’s difficult to ignore the Cowboys, who are top-heavy with talented seniors, especially Rudolph and Washington.

Coach Mike Gundy was asked if this August hype might prove to be an eventual distraction. In other words, if you think you’ve already made it, why put in the work?

“Those guys have taken control,” Gundy said. “The easiest thing for me to do is to watch these guys function on a daily basis and not have to do anything. I’m essentially staying out of the way.”

Rudolph and Gundy often text message each other, with Rudolph suggesting plays or offensive concepts he’s seen while watching a pro game or scrutinizing film. Rudolph says his favorite quarterbacks to study are Tom Brady and Matt Ryan. And he’s been known to gush about Peyton Manning.

The Cowboys are rich with receivers. Washington averaged more than 19 yards a catch last fall and he’s posted multiple 1,000-yard seasons. But teams can’t solely focus on him.

Jalen McClesky, who led the team with 73 catches last year, returns. Tyron Robinson, who was a five-star recruit when he signed with LSU, is eligible to play this season. Also look out for Marcell Ateman, who missed last fall because of an injury. In 2015, Ateman caught 45 passes for 766 yards and five touchdowns.

“If there is a better receiving corps in the country, I’d like to see them,” Cowboys offensive coordinator Mike Yurcich told CBSSports.com.

But what makes Oklahoma State work is its running game. Hill, who gained 1,142 yards last season, was considered the top freshman running back in the country. He missed the spring with a shoulder injury. But he showed off his strength earlier this month when he squatted 565 pounds in the weight room. The Oklahoma State strength staff tweeted a video of Hill’s Herculean effort.

The post Triplets of the Big 12: Oklahoma State appeared first on HookEm.