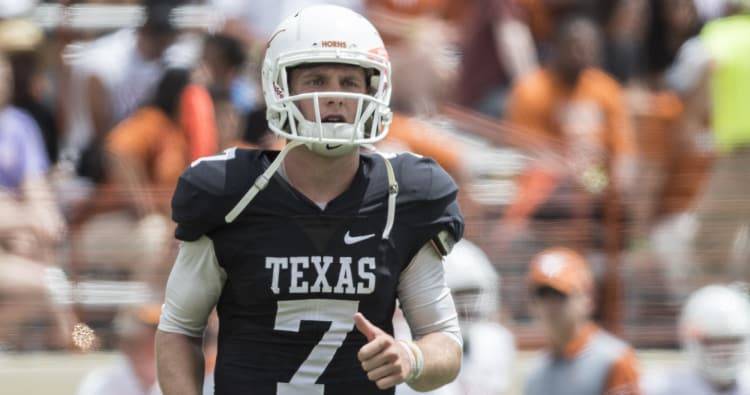 Shane Buechele showed the poise of a veteran quarterback on Tuesday.

Texas’ sophomore quarterback met with the media for the first time since last year’s season-ending loss to TCU. And with a starter still yet to be named, the obvious questions were asked.

Buechele, though, dodged reporters’ questions as if they were linebackers from the Maryland pass rush he will (likely) face on Sept. 2.

Is he Texas’ starting quarterback?

When will Tom Herman name a starter?

Will the Texas Rangers reach the playoffs?

Well, the son of Rangers bench coach Steve Buechele couldn’t help himself on that one.

Over the past few days, Herman has said Buechele would be Texas’ quarterback if the Maryland game was played in the immediate future. The Terrapins, however, don’t arrive in Austin until the first week of September. That leaves freshman Sam Ehlinger in the conversation.

Both players have had their moments since Herman arrived on campus. Buechele threw for nearly 400 yards in the Orange-White spring game. Less than two weeks ago, Ehlinger was named the MVP of UT’s second scrimmage. Buechele said the duel has “been competitively fun,” and that it has made each quarterback better.

This is the second straight season that Buechele has been involved in a quarterback competition. He beat out senior Tyrone Swoopes in 2016 and went on to throw for 2,958 yards and 21 touchdowns, starting every game.

“Just being an older guy, I guess that’s the only difference,” Buechele said when asked about the differences in the two preseason battles. “It’s still competing, no matter what you’re doing. It’s that mindset of you have to go out and get better and make the other person better.”

Buechele conceded that last year he had difficulty finding a voice of authority as a freshman. Buechele said UT coaches have challenged him to become “comfortable in the uncomfortable.” That tactic is paying off in the offensive huddle.

“When the quarterback’s the leader of the offense, I feel like things start to go a little bit,” Buechele said. “It’s been a lot of fun, being able to rally guys and get them going.”

Assignment to the scout team is not permanent. Players can work their way onto the two-deep roster. Herman recalled a scout-team player being promoted and contributing during each of his years as a coach.

Even if Texas adds a few walk-on freshmen after school beings next week, Herman will continue to use scholarship players on his scout team. The coach reasoned that those players needed to get reps. His starters also need to see scholarship-level competition at practice.

“It’s just really important that they give us a great look that we’re going to need to go into this game,” defensive tackle Poona Ford said. “That’s how we’re going to get better is if we get a great look, and that’s what they’ve been doing so far.”

The post Shane Buechele has become more vocal (but he’s still not saying who is starting for Texas) appeared first on HookEm.