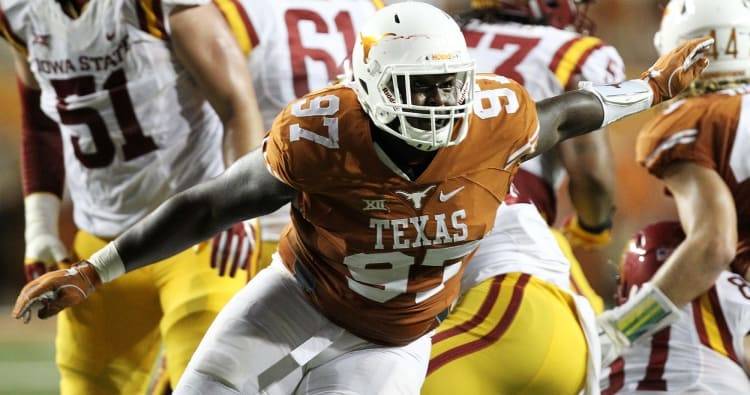 1. Nelson’s best game came at a good time: Last year’s season-opening upset win over Notre Dame. In his first career start Nelson had a career-high eight tackles and 1.5 tackles for loss. He was named the Big 12’s defensive player of the week.

Nelson was a three-star recruit who signed with Texas in 2014, the first cycle for Charlie Strong. He used his Florida recruiting connections to land Nelson late in the cycle to improve depth on the interior of Texas’ defensive line.

Nelson, who signed in the same class as fellow starting defensive lineman Poona Ford, didn’t receive an offer from UT until a month before signing day. He visited Texas a week before signing day and signed Feb. 5 as part of a late run of recruiting gets for Strong in his first class.

Nelson spent most of his prep career playing end. He finished his career with 220 tackles and 15 sacks. He was ranked the No. 57 overall defensive tackle in the nation and the overall No. 828 prospect in the cycle, per 247Sports’ composite.

WHO NELSON HAS BEEN HERE — SO FAR

Nelson was afforded a redshirt season to improve his strength and prepare to compete against college offensive lines. He made his debut in 2015. Nelson finished that year with seven tackles, a sack and a quarterback pressure while playing sparingly as a defensive tackle. His best game of the season was against Baylor, where he collected three of his seven tackles. His sack came against Rice.

Nelson moved up the depth chart as a sophomore last season and started eight games, playing in all 12 of last year’s contests. He posted 45 tackles with six coming behind the line of scrimmage. He also forced a fumble and earned honorable mention All-Big 12 honors by the coaches.

He’s entering his junior season with a wealth of experience. Nelson has already played in 20 games and started eight. He was named preseason All-Big 12 by Athlon Sports.

He started off strong last season against Notre Dame but was unable to replicate that performance. Still, he was a consistent presence that Texas will need again in the middle of the line. Nelson recorded at least three tackles in all but three games last year; new UT defensive line coach Oscar Giles lauded that consistency: “He’s a guy that brings his helmet and his lunch pail and he goes to work.” Giles said Nelson has also taken freshman defensive lineman Ta’Quon Graham under his wing and that Nelson’s been a “big brother” to the four-star recruit.