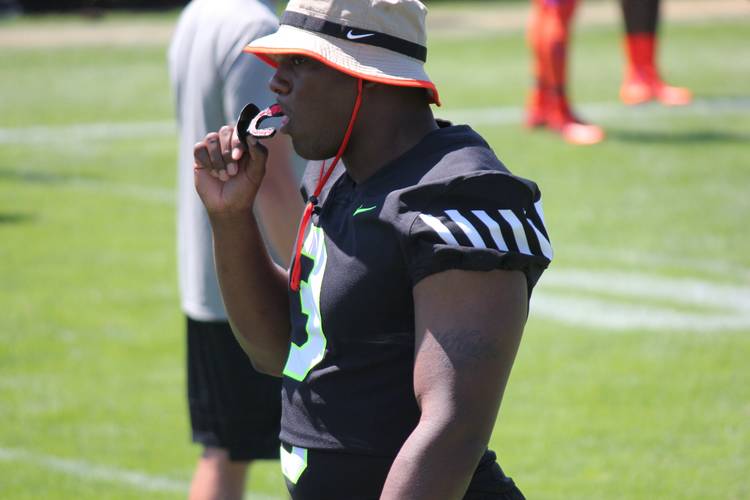 Much was made of Tom Herman’s run of commitments from Houston-area prospects this summer. The group, which includes four-star recruits Brennan Eagles, Al’vonte Woodard, Keondre Coburn, Malcolm Epps and Jalen Green, vaulted Texas’ 2018 class to No. 2 in the country.

But Herman’s recruiting success isn’t limited to Houston. He began his class with a commitment from Fort Worth Eastern Hills linebacker Byron Hobbs and the latest commit, Rafiti Ghirmai, resides in Frisco, playing his ball at Wakeland High School.

Five of Texas’ 18 commitments play outside of the state of Texas. Reese Moore, an offensive lineman, gave the Longhorns a pledge from West Texas. Caden Sterns, the No. 2 player on the Fabulous 55, plays at Cibolo Steele near San Antonio. Cameron Dicker, the country’s top-rated prep place kicker, is right down the road at Lake Travis. Texas also landed the two best players in East Texas with the four-star prospects Keaontay Ingram and DeMarvion Overshown.

The 2018 class holds 18 commitments following Ghirmai’s pledge. The Longhorns expect to sign around 22 or 23 players in the cycle, leaving around five spots open before national signing day.  Herman leaned on Houston for the right recruits while proving his recruiting pedigree isn’t limited to one city.

Texas is closing in on a finished 2018 class. Work does remain undone before full focus can shift to 2019. Spots open as more current players leave the program. The Longhorns won’t need to reach the 85-man scholarship limit with the 2018 class added until August 2018. That’s plenty of time for more attrition.

Expect Texas to remain in heavy pursuit of a handful of remaining prospects. The No. 1 target on the defensive side of the ball is becoming Arlington Lamar defensive tackle Bobby Brown. The 6-4, 275-pound prospect is a former teammate of current Longhorns quarterback Shane Buechele and Brown visited campus more than once in the offseason. With Coburn now committed, the focus at defensive tackle is squarely on Brown.

Texas also is in pursuit of out-of-state defensive end Ronnie Perkins, a four-star defensive end from Lutheran North High School in Missouri. The 6-2.5, 255-pound four-star is expected to take a visit to Austin in September. In-state options like Max Wright and Joseph Ossai appear to be longshots.

The duo left in the secondary are teammates at Houston Lamar. Cornerbacks D’Shawn Jamison and Anthony Cook are Texas’ remaining targets at corner. Jamison, who’s down to Texas and TCU, is scheduled to announce on Oct. 14 — that’s the same day as the Texas-Oklahoma game. Ohio State is in the lead for Cook.

Tight end becomes an interesting position because the Longhorns are still in pursuit of Fort Bend Ridge Point four-star Mustapha Muhammad despite already holding commitments from two prospects at the position in the cycle. Muhammad is considered a better prospect than both Epps and JUCO tight end Dominick Wood-Anderson. It’s unlikely the Longhorns take three tight ends, meaning one of the two current tight ends might be looking elsewhere if Muhammad joins the fold.

Offensive line is the toughest position to project for Texas despite Monday’s pledge from Ghirmai. Moore and Ghirmai give the Longhorns two tackle prospects, but the Longhorns want to sign at least three big men in the class. One option is Chasen Hines, a four-star from Marshall currently committed to LSU. Texas might need to leave the state to find a fourth player along the offensive line.

Brooks is the only linebacker in the 2019 cycle currently in possession of a Texas offer. The 6-3, 200-pound four-star prospect from Flower Mound recently released a top nine list of potential college destinations; the Longhorns made the cut along with TCU, Penn State, LSU and others.

Brooks ranked No. 13 on the Next 25, our ranking of the top 2019 prospects in Texas. The outside linebacker is a versatile defender with pass rushing skills and the athleticism to play in coverage. The Longhorns face stiff competition for his commitment.

The post Tom Herman’s recruiting success at Texas not solely based on Houston appeared first on HookEm.

Triplets of the Big 12: West Virginia