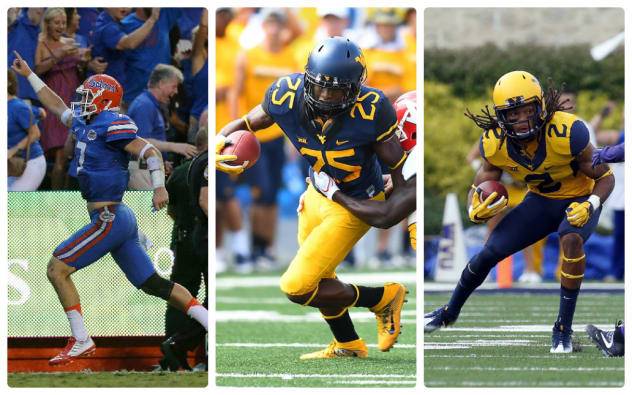 QB: Will Grier (2016 — did not play after transferring from Florida)

Never mind that he’ll rely on a newcomer at quarterback and that his best receiver might be a former quarterback. Or maybe the top wideout will be the guy with the incredible Mountaineers pedigree.

And never mind that a new coordinator will be calling the offensive plays.

The Mountaineers are coming off a 10-win season and Holgorsen is expecting similar results this fall.

He hired Jake Spavital, his former protégé, to be his offensive coordinator. Spavital held a similar job with California last fall. He’d previously been Texas A&M’s coordinator. Holgorsen trained him when the two worked at Houston, then Oklahoma State. And Holgorsen brought Spavital with him to West Virginia in 2011 to coach the quarterbacks.

“So I’ve got 100-percent complete confidence in him being able to do this. … He was one of the hottest, most sought after offensive coordinators in the country last year and we were fortunate to get him.”

West Virginia’s new quarterback is Grier, a former top recruit who initially signed with Florida. He started in 2015 and led the Gators to a 6-0 record. Then he tested positive for a banned substance and was suspended for a full year by the NCAA. He transferred to WVU and sat out last fall. The NCAA has ruled he’ll be eligible for the season opener.

The Mountaineers lost their top two receivers from last year. The main guys this season could be Ka’Raun White or David Sills.

The comparisons to Kevin will be there, since Ka’Raun plays the same position.

“You never know,” Spavital told reporters. “You don’t want to put that pressure on him to be like that, but Ka’Raun is turning into his own man. He’s making a name for himself.”

David Sills also is developing into an option at receiver. He was a backup quarterback for WVU in 2015, but was switched to receiver because of injuries at the position. He caught the winning touchdown pass against Arizona State in the Cactus Bowl. But he transferred to a junior college to play quarterback.

Now he’s back in Morgantown to play receiver. He didn’t get a scholarship offer to play quarterback from an FBS school.

There are no nagging questions at tailback. Crawford, who only started four games last season, is the top returning back in the Big 12. He gained 1,177 yards and averaged a league-best 7.3 yards a carry.

The post Triplets of the Big 12: West Virginia appeared first on HookEm.