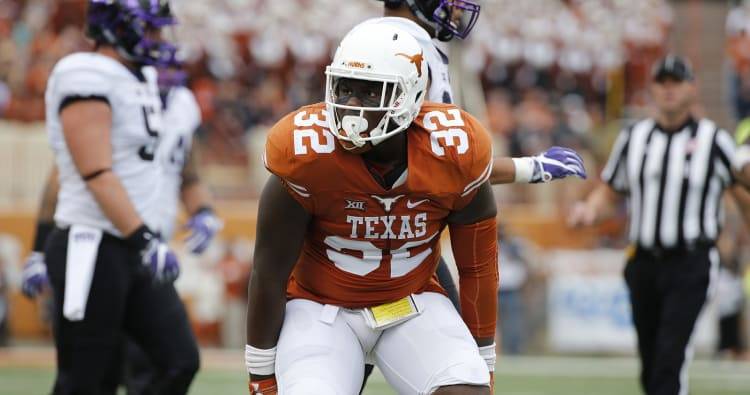 1. His first start? Last year against Oklahoma State. He had three tackles — all solo stops.

3. His best game? Roach had a career-high seven tackles against West Virginia as well as a career-high three tackles for loss. He also had his third sack of the season, which moved him into a tie for 10th place on the all-time freshman sacks list.

Roach was a member of the 2016 recruiting class. It was the best class of Charlie Strong’s tenure, ranked No. 7 in the country and No. 1 in the Big 12. The sheer size and star power included in that class allowed Roach to go overlooked in the recruiting process. Hailing from Louisiana, he was a three-star defensive end and the No. 596-ranked overall prospect in the nation. He was the No. 28-ranked strongside defensive end and the No. 30-ranked prospect in the state of Louisiana, per 247Sports’ composite.

Roach held 23 offers, choosing the Longhorns over programs like Tennessee and LSU. At 6-3 and 255 pounds coming out of a Louisiana private school, it was hard to predict where he’d wind up on the field. Was he an oversized defensive end? An undersized defensive tackle?

Those questions kept him from ranking higher on recruiting services. Of the 28 players who enrolled at Texas from the 2016 class, he was rated as the 21st best prospect. Fellow defensive linemen like Chris Daniels, Andrew Fitzgerald, D’Andre Chirstmas and Marcel Southall ranked higher.

WHO ROACH HAS BEEN HERE — SO FAR

Roach emerged as Texas’ most impactful defensive lineman as the 2016 season progressed. He played in all 12 games, starting five — all within Big 12 play. Roach was the honorable mention Big 12 defensive freshman of the year last season. His eight tackles for loss were tied for eighth all-time for a Longhorns freshman.

Roach notched his first career sack against UTEP and followed it up with another sack the next week at Cal. His disruptive play forced him into the starting rotation against Oklahoma State. His best game of the season was against West Virginia. In the game, Roach recorded a career-high seven tackles. His three sacks rank him third all-time in Texas history for a freshman.

First off, Texas needs Roach to be healthy since a toe injury slowed him through part of the fall camp. He won’t take all of this season’s snaps at end but he should see more playing time off the edge than junior Charles Omenihu. That will leave Roach with plenty of opportunities to prove why he landed on the Big 12’s preseason team and the Bronco Nagurski Trophy’s watch list. Opposing quarterbacks beware: The 270-pound Roach registered a sack during Texas’ spring game in April and only four other Longhorns bettered his sack total of 2016. Adding Roach’s three sacks into the mix, Texas registered 41 sacks last year, a statistic the team wouldn’t mind replicating this fall.

Top opponents for Texas in 2017, No. 10: Oklahoma LB Ogbonnia Okoronkwo