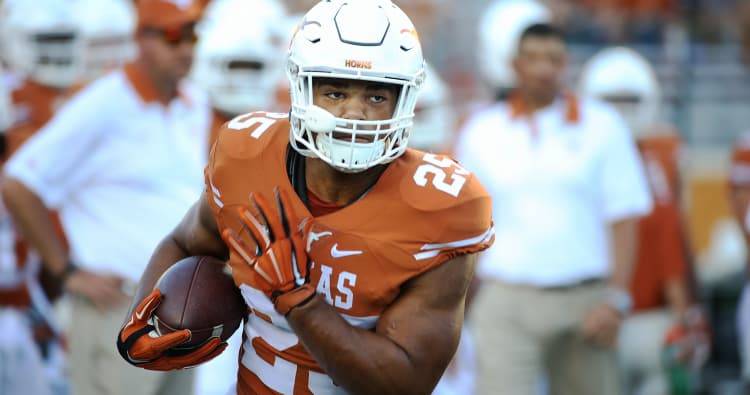 1. This is a top-heavy list. Warren’s best day as a Longhorn came in 2015 against Texas Tech when he set a school single-game freshman record with 276 yards, eclipsing Cedric Benson’s old mark (213) from 2001. It was the sixth-best rushing performance by a Longhorn ever and the third-best game in the country. He broke a 91-yard touchdown run, which was the longest run ever by a UT freshman and the fourth-longest run in Longhorns history. It was the first start of his career. Oh, he earned Big 12 offensive player of the week honors.

2. Warren followed up that huge performance with a start the next week, at Baylor. The freshman had 28 carries for 106 yards and ended up sharing offensive MVP honors for the game.

3. Last year at Cal, Warren had 18 carries for 119 yards and scored two touchdowns.

Warren was Texas’ third-highest rated recruit of Charlie Strong’s 2015 signing class; only linebackers Malik Jefferson and Anthony Wheeler were rated higher. Warren, 6-2 and 240 pounds at the time, offered a rare blend of size and athleticism.

Warren, the son of former Seattle Seahawks running back Chris Warren, broke out as a high school senior. He was the District 11-6A MVP after recording 2,329 yards and 34 touchdowns along with 12 receptions for 178 yards and another two scores. In his three-year varsity career, he rushed for 4,135 yards and accounted for 62 total touchdowns. He played in the U.S. Army All-American Bowl all-star game after his senior season.

Warren was ranked No. 15 on the 2015 Fabulous 55 and was the list’s third running back behind No. 5 Soso Jamabo (UCLA) and No. 9 Ronald Jones II (USC). He was the No. 8-ranked running back in the country and the nation’s 78th-ranked overall recruit per 247Sports’ composite.

WHO WARREN HAS BEEN HERE — SO FAR

Warren has only 12 career games and four career starts under his belt. He made an instant impact as a freshman, starting the final two games of 2015 after an injury to Jonathan Gray. That first start, against Texas Tech, was a career game for him — a UT freshman-record 276 yards. In his two starts he racked up 382 yards and four touchdowns after totaling only 88 yards in his first six appearances.

The starting running back position was Warren’s to lose heading into 2016. He played in the first four games, starting against UTEP and Cal, but suffering a season-ending injury against Oklahoma State. He finished the UTEP game with 95 yards and a touchdown. In the Cal game, he recorded 119 yards on 18 carries.

His injury made way for D’Onta Foreman to take over as the full-time running back and he ended the season with more than 2,000 yards before declaring early for the NFL Draft.

More than anything else, the Longhorns need Warren to be durable. Right now you’d have a hard time convincing a skeptic he’s anything but.

He suffered a season-ending knee injury last season. Then he tweaked his hamstring in spring drills, and in the bad luck department, he got the mumps this summer. Warren next missed a few practices this August after sustaining a concussion.

It’s hard to say a 250-pound running back is fragile, but Warren desperately wants to fill the void created by Foreman’s departure. He can’t do that standing on the sideline.

The Longhorns need a bell cow, someone capable of carrying the ball 15-20 times per game. That should be Warren. He’s got to stay healthy first.

The post The Texas 22: Starting at running back — Chris Warren III appeared first on HookEm.

Longhorns in the NFL: Foreman and defenders continue to shine