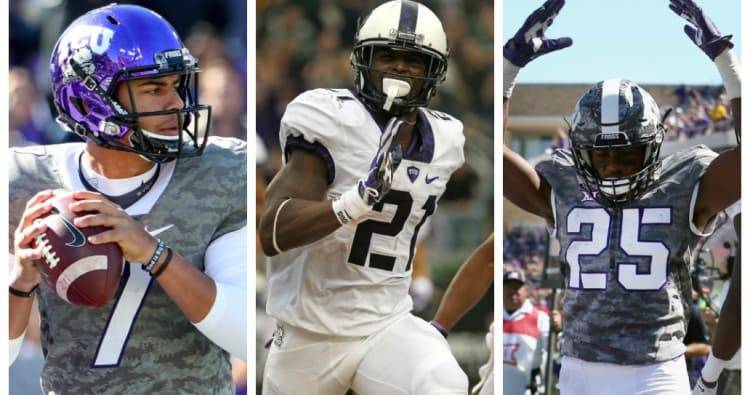 TCU, after consecutive seasons of dazzling double-digit wins, dropped dramatically last fall. With a loss to Georgia in the Liberty Bowl, the Horned Frogs finished at 6-7.

But the offense may be too good for such a record this year.

It all depends on how well Hill handles his senior season. You couldn’t argue with Hill’s stats last fall, when he was a first-year starter for the Frogs after sitting out a year once he transferred from Texas A&M.

With 269, Hill had the second-most completions in school history. But he also threw 13 interceptions, the most of any starter during the Gary Patterson era.

Hill already has won a small victory in training camp. Fans like to cheer for the second-string quarterback. And TCU’s Shawn Robinson, a four-star prospect who enrolled in the spring, was the subject of much message board speculation.

But Patterson threw his support to Hill earlier this month, saying he was the starter by a large margin.

“He has the ability to do it,” Patterson told reporters. “He just needs to take it from there to there. Do I think he has his swagger back? He needs to play. But I think it’s a quiet confidence.

Patterson’s running game pleases him. The tailbacks, led by Hicks, are talented. Plus if Hill is used as a zone-read weapon, the runners could be very difficult to stop.

Hicks rushed for 1,042 yards and 12 touchdowns last year. He also scored two touchdowns via passes with 427 yards in receptions. His 47 catches were a team high. And his 1,483 all-purpose yards are the most of any returning Big 12 player.

Pro Football Focus studied video of all league runners last year. Hicks forced 51 missed tackles, tops among all Big 12 backs. Of those 51, 15 were missed by defenders trying to tackle him after he caught a pass.

TCU also will be getting back the services of Shaun Nixon, who missed last season with a knee injury. Nixon, at one time, was listed as the starting slot back. He was second on the team in receptions in 2015 behind All-American Josh Doctson. He’ll see action at both tailback and slot this fall.

“I think we’ve got the best running backs in the Big 12. Period,” TCU co-offensive coordinator Curtis Luper told Diehards.com. “I mean, that could be your headline.”

The most dynamic receiver on the team is KaVontae Turpin. But there are question marks.

He was held out of spring so he could take care of academics. Patterson confirmed last month that Turpin was allowed to practice again.

After a spectacular freshman debut in 2015 — he had 1,675 all-purpose yards — injuries curtailed Turpin in 2016. He played in eight games, with his production dropping to 986 total yards.

Patterson also had to shuffle his offensive staff in the offseason.

Doug Meacham, the play-caller, was hired by Kansas. Sonny Cumbie, who had been the co-coordinator with Meacham, was promoted to play-calling duties. Patterson then elevated Luper, the running backs coach, to co-coordinator.

TCU’s approach may be the same with Cumbie calling the plays, but there could be subtle differences. No one will know for sure until the season starts.

The post Triplets of the Big 12: TCU appeared first on HookEm.

Five 2018 commits who could make an impact as true freshmen