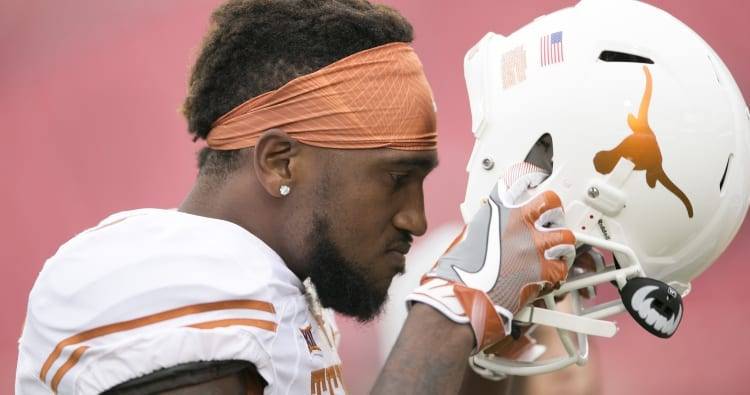 Texas receiver Dorian Leonard sure sounds like someone who’d run through a wall for the Longhorns.

Texas coaches, of course, would prefer that Leonard runs through, around or past defenders this fall, but the sentiment is likely appreciated. Leonard, though, made it clear after UT’s practice on Thursday that he’s focused ahead of his senior season. Texas opens against Maryland on Sept. 2.

Leonard was speaking three days after Tom Herman discussed the receiver’s buy-in to the new coaching staff. Herman was asked by a reporter if his opinion had changed about anyone since the off-season began. Herman mentioned Leonard’s name before the question was completed.

Herman described his first month with Leonard as “rough.” The new coach didn’t think Leonard was giving his maximum effort. Leonard didn’t dispute the first impression he made, but added he’s matured. Herman noted Leonard and Drew Mehringer — UT’s fifth receivers coach in as many years — have since formed a connection.

“He’s a changed man. I like being around him,” Herman said. “I’m sure there are others, but that one definitely sticks out for me as a guy that’s done a 180 in my mind. Now knock on wood, but he’s doing a great job.”

A 6-5, 205-pound product of Longview, Leonard has 30 catches and seven starts in his career bio. He caught a pass in 10 of Texas’ 12 games last year, and no Longhorn bested his seven-catch effort against West Virginia. One of six UT receivers to catch three touchdowns, he scored on six-, 45- and 46-yard plays.

Leonard returns to a crowded receiving room as one of the 12 seniors on UT’s roster. This spring he had four catches for 68 yards in Texas’ Orange-White game.

“I thought Dorian last year, towards the end of the season, was a really good playmaker for us,” quarterback Shane Buechele said. “I think his mentality has changed a little to where this is his last season and he wants to go out with a bang.”

Leonard said during the offseason he tried to improve his speed and technique. He also worked on catching the football since “that’s a big part of my job.” Additionally, he said he continued to mentor and bond with redshirt freshman receiver Davion Curtis.

Injury update: Senior defensive back Antwuan Davis broke a bone in his hand last week. Texas, though, announced he has not missed a practice. He’s wearing a protective cast.

Davis, from Bastrop, joins linebacker Naashon Hughes and kicker Mitchell Becker as the last links to Mack Brown’s final team at Texas. Davis has 20 career tackles and started five games in 2015. He’s expected to provide depth behind P.J. Locke III at the nickel back position.

Some time off: Herman treated his players to a treat on Thursday — an abbreviated practice. Texas was set to wrap up around 10:15 a.m. The players, however, were already leaving Denius Fields when media members began arriving at 10.

Said UT defensive lineman Chris Nelson: “We’ve been banging out. Yesterday we had a bang-out practice. Coach liked the way we flew around, hitting each other. He said if y’all go out there and do what y’all are supposed to do, he’s going to take care of us. Today he took care of us and we just handled it like pros.”

The post Dorian Leonard is finally catching on with his Texas coaches (knock on wood) appeared first on HookEm.