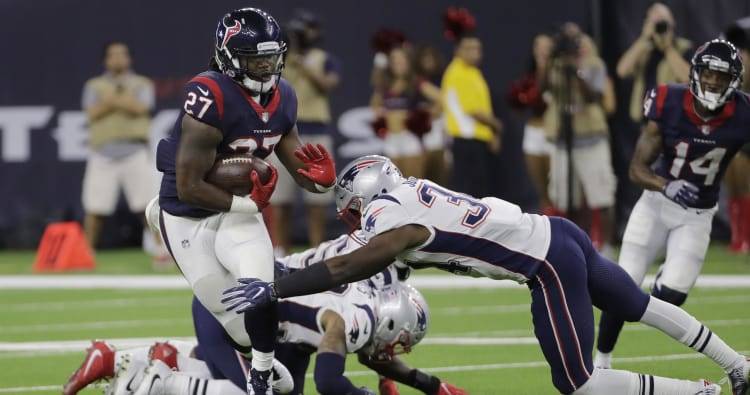 The more D’Onta Foreman plays, the more Lamar Miller must get a little bit nervous. Foreman rushed the ball seven times for 17 yards and scored a touchdown. Even more impressive was his 63-yard catch and run. He caught both of his targets, gaining 66 yards through the air.

Among the rising defensive stars out of the University of Texas is Jordan Hicks. The linebacker had a tackle and a sack in the 20-16 win over the Bills. He led the Eagles in interceptions last year and is turning into a leader on the defensive side.

It might be only preseason but Earl Thomas was second in tackles in the Seahawks’ 20-13 win over the Vikings. He recorded six stops in the win.

Another defensive back from UT, Duke Thomas, has been seen returning kicks as he tries to make the Dallas Cowboys’ roster. He took one kickoff 17 yards and made five tackles, including one for a loss. Thomas had the second-most tackles on the team.

Colt McCoy, Redskins—The former UT quarterback was 7-of-11 for 70 yards and a touchdown in another solid outing.

Jamaal Charles, Broncos—He’s yet to see the field in the preseason and it’s possible he gets cut if he doesn’t show he can be valuable. He’ll get his shot Saturday.

Fozzy Whittaker, Panthers—He returned a kickoff for 19 yards and ran the ball three times for 23 yards.

Kenny Vaccaro, Saints—Vaccaro had three tackles and a sack in the 13-7 win over the Chargers.

Alex Okafor, Saints—Okafor had a nice game, getting a sack and making two tackles for loss in the win over Los Angeles.

Adrian Phillips, Chargers—The defensive back made two tackles and hit the quarterback in the loss to the Saints.

Marquise Goodwin, 49ers—The former track star led the Niners with three catches for 44 yards, including a 22-yarder, in the 33-14 loss to the Broncos.

Brian Orakpo, Titans—He didn’t log a stat in the 34-27 win over the Panthers.

Marcus Johnson, Eagles—He caught two of his three targets and led the Eagles with 45 yards receiving.

Malcom Brown, Patriots—Brown had four tackles in the 27-23 loss to the Texans.

Tyrone Swoopes, Seahawks—The former UT quarterback had one reception for 12 yards as he tries to make the team as a tight end.

Justin Tucker, Ravens—Another week, another 50-yard field goal for Tucker. He was 3-for-3 in the 31-7 win over the Dolphins, including a 52-yarder.

Derrick Johnson, Chiefs—The linebacker doesn’t have to prove anything in preseason as he waits for the regular season to begin.

Roy Miller, Chiefs—He’ll make his debut with the Chiefs on Friday against the Seahawks.

Quandre Diggs, Lions—Diggs made two tackles in the Lions’ 16-6 win over the Jets.

Hassan Ridgeway, Colts—The defensive tackle made one tackle and hit the quarterback in the loss to the Cowboys.

Trey Hopkins, Bengals—The former Longhorn is looking to take a starting guard spot, but the Bengals rushed just for 72 yards.

Sam Acho, Bears—Acho made two tackles, including one for a loss.

Lamarr Houston, Bears—He had a quarterback hit in the 24-23 win over the Cardinals.

Geoff Swaim, Cowboys—Swaim made one catch for 17 yards in the 24-19 win over the Colts.

Nick Rose, 49ers—The for UT kicker wasn’t given much of an opportunity to outshine Robbie Gould. They both went 1-for-1 on extra points.

Malcolm Brown, Rams—Brown had a tough time gaining ground as he rushed for 13 yards on nine carries in the 24-21 win over the Raiders.

Paul Boyette Jr., Raiders—The rookie didn’t register a stat in the loss to the Rams.

Phil Dawson, Cardinals—Though he missed a field goal, Dawson connected on a 52-yarder and made both extra points in the 24-23 loss to the Bears.

Caleb Bluiett, Jaguars—He didn’t log a stat in the 12-8 loss to the Buccaneers.

Brian Robison, Vikings—He didn’t register a stat in limited action against the Seahawks.

The post Longhorns in the NFL: Foreman and defenders continue to shine appeared first on HookEm.

The Texas 22: Starting at running back — Chris Warren III