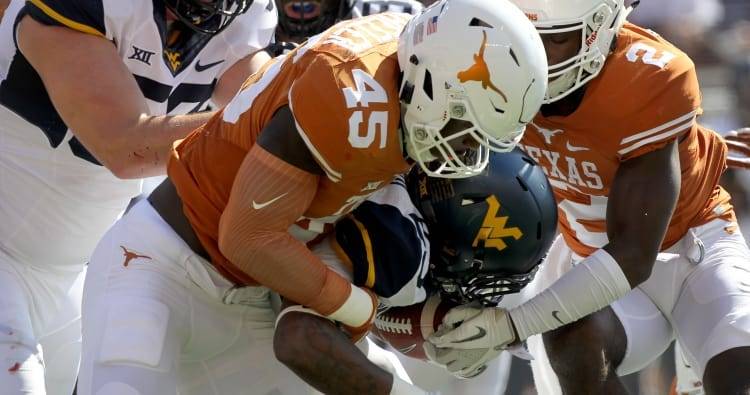 2. Against Baylor in 2015, he had six tackles, one pass breakup and recovered a fumble that led to a Longhorns touchdown drive.

3. He set a freshman season high with eight tackles against Texas Tech.

Wheeler was one of five national top 100 players to sign with Texas in 2015. The group ranked No. 10 nationally and No. 1 in the Big 12, per 247Sports’ composite. Wheeler was the second-highest rated member in the class, trailing only Malik Jefferson, a five-star linebacker. Wheeler was an outside linebacker prospect who checked in as the No. 75 overall player in his class and the No. 7 outside linebacker prospect in the entire country. He was ranked No. 12 on the Fabulous 55.

Texas scored an upset Oklahoma to get his signature late in the cycle. Wheeler committed to Texas a month before signing day.

Wheeler finished his senior season with 137 tackles, including 21 behind the line of scrimmage, and seven sacks. He was the defensive MVP of District 9-6A and received an invitation to the Under Armour All-America Game. He was a two-time all-state selection and finished his junior year with 110 tackles and six sacks.

WHO WHEELER HAS BEEN HERE — SO FAR

Wheeler found snaps immediately and ended his freshman season with 36 tackles and a fumble recovery. He spent most of his time as a substitute linebacker and a contributor on special teams before earning starts against Kansas State and Baylor. His best game as a freshman was an eight-tackle performance against Texas Tech.

He earned more playing time as a sophomore. Wheeler started seven of the 11 games he participated in. Despite missing a game he ended the year as Texas’ leading tackler, with 65. He also recorded 2.5 tackles for loss, two forced fumbles, two pass breakups and half a sack. He set a career high with 11 tackles against UTEP.

Wheeler led Texas in tackles last year and even missed the 45-37 win at Texas Tech, when plenty of defensive opportunities existed. Still, Texas will be asking for even more from him this year. Todd Orlando has described Wheeler as a physical player, but Texas’ new defensive coordinator has also stated that it’s his job to “to make sure he understands that the middle linebacker spot is the quarterback of the defense.” Wheeler told reporters this month that he has been working daily on his communication and leadership skills.

The post The Texas 22: Starting at inside linebacker — Anthony Wheeler appeared first on HookEm.

Top opponents for Texas in 2017, No. 9: Oklahoma TE Mark Andrews