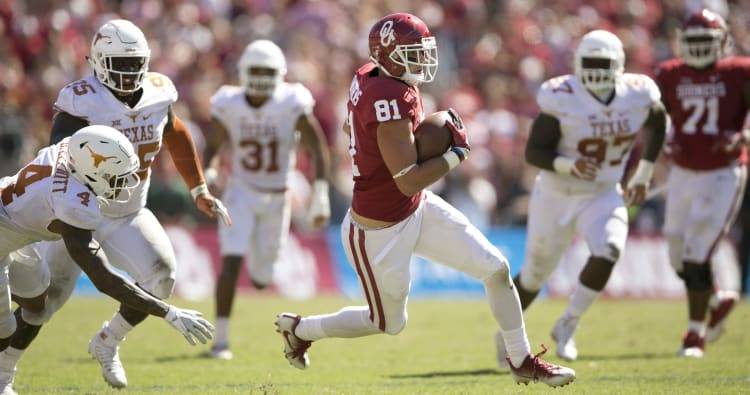 Texas coach Tom Herman is on a mission to revive the Texas tight end. At this point, Longhorns fans might not even remember what a pass-catching tight end looks like. If looking for an example, one could do worse than Oklahoma redshirt junior Mark Andrews.

Andrews is a tight end in name only. Well, name and stature. Despite standing at 6-foot-5, 254 pounds, the product of Scottsdale, Ariz., rarely puts his hand in the turf. His large mitts are much more valuable catching footballs. Last year, Andrews finished second on the team behind Dede Westbrook in receiving touchdowns, hauling in seven. He finished the season with 31 catches for 489 yards despite a nagging shoulder injury that limited his productivity.

Andrews is the pro-style H-back that Herman craves, and probably even more versatile than required. Andrews rarely lines up as a traditional tight end. You’ll normally see him either in the slot or out wide, or occasionally set off from one of the tackles. This allows play-caller Lincoln Riley to highlight Andrews’s wide array of skills while sometimes using his big frame as a blocker. No matter where he’s lined up, Andrews is always a threat to score.

Andrews has only caught one pass against Texas in his career thus far, but it was a big one. He popped out for a screen early in the fourth quarter in 2016, then turned up field for a 29-yard gain. The drive eventually led to a Samaje Perine touchdown that extended OU’s lead to 42-27.

The post Top opponents for Texas in 2017, No. 9: Oklahoma TE Mark Andrews appeared first on HookEm.

The Texas 22: Starting at inside linebacker — Anthony Wheeler