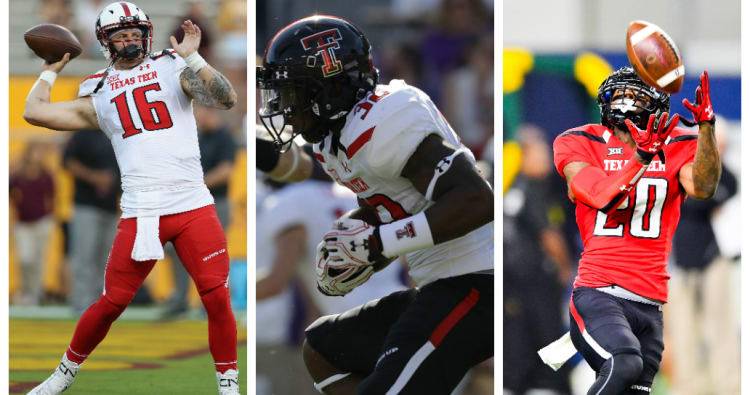 There are so many questions about Texas Tech.

Coach Kliff Kingsbury has been told to focus more on fixing the defense, which surely is an odd task given that he’s known most for teams that score big and throw for astronomical numbers.

Then there are the concerns about quarterback and how the Red Raiders will react. Patrick Mahomes left for the NFL a year early and was the 10th pick of this year’s draft. Fifth-year senior Nic Shimonek, a transfer from Iowa, will replace Mahomes.

Morris said Shimonek reminds him of former Tech quarterback B.J. Symons in that Shimonek is not afraid to throw it downfield.

The comparison to Symons also is apt given this other detail. Symons, in his career at Tech, backed up Kingsbury for three years. He started in 2003, led the Raiders to an 8-5 season and broke the NCAA single-season passing record with 5,833 yards. His 52 touchdown passes were second-best in NCAA history. It also helped that Wes Welker was his main target.

Shimonek described himself as a “blue-collar guy” in an interview with the Dallas Morning News.

“I’m playing this season with a chip on my shoulder for having to sit so long,” Shimonek said. “I know other people want my job here. But I’ve worked so hard to get where I finally am. I’m not going to let anyone take it away.”

Just before Tech opened camp, Kingsbury said: “He’s a tough young man, hardest worker on our team, studies the game inside and out. He’s a bright kid. I expect him to play at a very high level. I expect him to be competitive.”

Kingsbury also said that Shimonek got a ton of reps with the first-team in practices last fall. Mahomes had a bad shoulder for a good portion of last year and Kingsbury would limit what he did during the week.

Who’s on the roster to help the transition from Mahomes to Shimonek be as seamless as possible?

The next great Tech receiver is set to be Keke Coutee, who predicted in the offseason that he wanted to break Michael Crabtree’s school record of 22 touchdowns. Coutee is coming off a 221-yard performance against Baylor, Tech’s final game of 2016.

Or it could be Dylan Cantrell, who caught 58 passes last year. Or maybe it’s 6-3, 215-pound Derrick Willies.

Tech utilizes running backs to keep defenses from committing solely to its passing game. Da’Leon Ward, who gained 428 yards last fall, is the top returner. But Kingsbury said Ward has academic issues and may not be eligible this fall. Tech will know more next week.

The post Triplets of the Big 12: Texas Tech appeared first on HookEm.