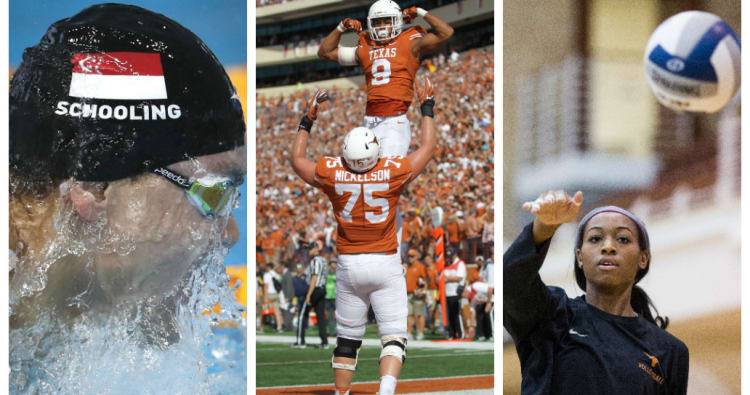 Inside the Texas athletic department, there is undeniable enthusiasm about this upcoming athletic year. Everyone has their fingers crossed.

And there’s Eddie Reese, the old lion who’s entering his 40th season at UT as the men’s swimming coach. He’s got 13 national titles and counting.

The coaches may be the headliners. But this athletic department thrives on breakout stars. In that vein, the American-Statesman unveils its inaugural list of top 10 Longhorns athletes to watch during the 2017-18 athletic year.

To qualify for consideration, we looked at an athlete’s importance to his or her team and the athlete’s career arc. No one player determines the success of an entire season. But if all 10 play well, the Longhorns are far more likely to win championships.

There are plenty of choices on the football team. It’s easy to look at quarterback Shane Buechele or linebacker Malik Jefferson. But in a league full of aerial acrobats, Johnson, a 6-6 sophomore wide receiver, is one who could rise up and become a national standout for a program desperate to reclaim the spotlight.

Johnson’s new position coach Drew Mehringer flat-out challenged him to be more physical. The Los Angeles-born Johnson had 28 catches for 315 yards and three touchdowns last season. Those numbers should go up dramatically.

Johnson will tower over Big 12 cornerbacks. He should go get the football and go score.

Aston has acquired so many McDonald’s All-Americans on the roster, it’s hard to keep up. The Horns’ scoring potential and overall athleticism is impressive. Brooke McCarty, the reigning Big 12 women’s basketball player of the year, is the team’s emotional heart and soul. But Aston is a fire-breathing defensive coach, and that’s what makes Atkins so appealing, not to mention vital.

The 5-11 senior guard from Duncanville averaged 35.5 steals as a freshman and sophomore. She had 64 steals last season and landed on the Big 12’s all-defensive team. She also boosted her scoring to 12.8 points per game and shot a career-high 37.7 percent from 3-point range.

The women’s team took a huge mental step by knocking off Baylor in Waco last season. Now comes the next step: Getting to the Final Four.

The men’s golf program has been on a tear recently, cranking out competitive players year after year. It’s finally Doug Ghim’s time to shine brightest. How’d he spend the summer? He was the runner-up at the U.S. Amateur championship, earned an invitation to the Masters and the U.S. Open and earned a spot on the Walker Cup team.

By pairing Ghim with fellow senior Scottie Scheffler, a star in his own right, the Longhorns have a dynamic 1-2 punch to make another long run to the NCAA championships.

Wearing burnt orange comes with certain responsibilities. As great as winning may be, athletes still have to take care of business in the classroom. Nobody knows the importance of that more than Ogbogu, an All-American from Coppell. She basically redshirted last season after three standout years for academic reasons, the school said.

Now, the dynamic 6-2 middle blocker is back in the lineup for coach Jerritt Elliott. A program that’s been oh-so-close to winning the national title the last two years is glad to have her back.

Sure, there’s a ton of excitement about five-star center Mo Bamba, a potential NBA lottery pick in 2018. But another critical piece is the guy who’s getting him the ball.

Matt Coleman is just as important for Smart as T.J. Ford was to Rick Barnes. The freshman is a true difference-maker at point guard, something the team sorely lacked last season. Smart must do everything possible to lighten the burden on Coleman’s shoulders. Just because he’s now on campus doesn’t mean success will come easy for the 6-2 dynamo from Virginia.

“I have yet to play a college game, yet to score my first college point, yet to commit a turnover, but I have committed a turnover in practice,” Coleman said.

No team needed a shot of enthusiasm more than Angela Kelly’s soccer program. That’s exactly what the Longhorns have in Berg, a 5-6 freshman midfielder from Celina. Ranked as the state’s second-best overall prospect, Berg made the Team USA Under-18 national roster and has traveled all over the country playing club soccer.

How’s this for a spark? In Texas’ season opener against Rice on Aug. 18, Berg scored 25 seconds into the match. She’s been waiting a while now. Berg famously committed to UT as an eighth grader.

Trying to decide between Schooling or Townley Haas was agonizing. Both are likely equals in Reese’s mind. Both have Olympic gold medals and both have helped the Longhorns win NCAA national titles. In this case, seniority wins out. Schooling is the graybeard senior while Haas is a junior.

Schooling is not only a master in the 100-meter butterfly, as swimming legend Michael Phelps can attest. He’s huge on all the various relays, like the 200-meter freestyle and the 400-medley relays.

If the pride of Singapore has another standout year, counting up all of the senior’s accolades may take forever.

Sorry, Devin Duvernay. You may not be the fastest athlete on campus anymore. That title may belong to Burton, a sophomore from Jamaica. She was the fastest freshman in NCAA history in the 100-meter hurdles last spring, crossing the line in 12.65 seconds.

Burton ran a 12.7 in the 100-meter hurdles at the Jamaican championships. Then she clocked a 12.92 in the semifinals of the IAAF world championships at London Stadium. She’s also a member of UT’s 400 relay team that finished 11th at the NCAAs last spring.

Blink, and you may miss her.

The men’s team has soaked up plenty of attention, but the women’s team is now cooking, too. Senior Sophia Schubert went one step further than Ghim this summer and actually won the U.S. Women’s Amateur.

She became the third Longhorn in school history to win that and the first since Kelli Kuehne in 1996. By winning, Schubert guaranteed herself a spot in the 2018 U.S. Women’s Open. Her caddie certainly helped; it was Texas women’s coach Ryan Murphy.

For any UT women’s golfer to have her name alongside Kuehne is a big deal. The best is yet to come for this business major from Oak Ridge, Tenn.

Maybe it’s wholly appropriate that the standout pitcher for the baseball team is from Las Vegas. A glitzy program needs a shining star, right? That’s Kingham, a dynamic, junior right-hander who went 10-4 last season in 13 starts. Opposing batters hit just .240 when he was on the mound.

Every coach wants his starter to gobble up innings. Kingham went at least seven innings against seven Big 12 opponents. He allowed only one run in 7 2/3 innings and got the win against UCLA in the NCAA regionals.

Pierce has every intention of turning Texas baseball back into a powerhouse. He’ll gladly find plenty of work for Kingham.

Reigning Big 12 player of the year, is one of the most exciting athletes on campus.

Gatorade player of the year and 2016 Team USA Under-20 junior team member.

San Marcos product is a dynamic defensive shortstop with a .964 fielding pct.

Italian-born standout, All-Big 12 freshman went 9-7 in the difficult No. 1 slot.

The post Bright, burnt-orange stars: The top 10 Texas athletes to watch in 2017-18 appeared first on HookEm.

Triplets of the Big 12: Texas