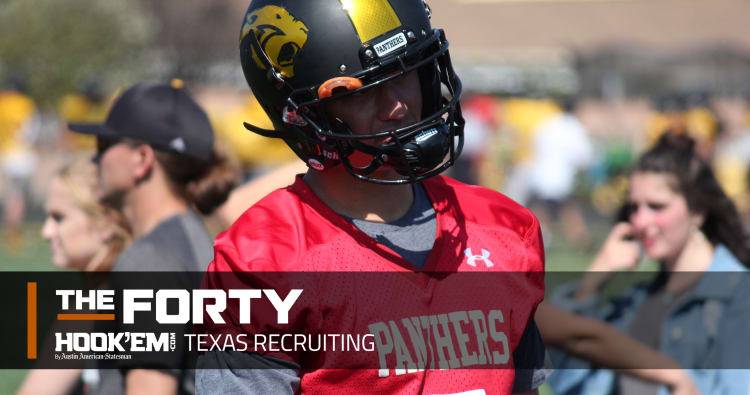 NEWBURY PARK, Calif. — It’s easy to forget that Texas holds commitments from a pair of four-star quarterbacks in the 2018 class because both are from outside of the state. Cameron Rising, the No. 7-ranked pro-style quarterback in the country, is one of those commits. The Newbury Park (Calif.) star begins his senior season Friday night at home against Pacifica.

Rising is ranked as the No. 157 overall prospect in the nation, per 247Sports’ composite. He made his name as a sophomore, throwing for 3,213 yards and 40 touchdowns to just one interception. He rushed for 756 yards and 11 touchdowns that season. Rising is itching to return to action after missing the final half of his junior season because of an injury to his throwing shoulder, suffered on a running play.

Rising is all football, all the time. The injury didn’t take away his hobby or his sport, but scratched at his deepest passion next to God and family, Rising said. It was a “horrible” time in his life, but he also managed to find good in his situation, and possibly a future after football.

“To say it was tough is putting it lightly. It killed me not to be on the field as a junior. It was a terrible time, but it did open my eyes to football from a coach’s perspective,” he said. “We had a younger quarterback and I helped him as much as I can with by pointing out coverages or relaxing him after the coach rips him for an interception. That was an appreciation I gained for the game.”

Coaching is likely in Rising’s future when his own career concludes. He groomed his backup throughout the 2016 season and the reward Rising felt on the sidelines was something he enjoyed more than anticipated.

“I’d love to coach high school because of the growth you can see over a single season. It is rewarding to show someone something and then watch them go do it and have success,” Rising said. “It’s not the same as playing, but it is close.”

Asked if he learned anything from his injury as a junior Rising simply replied “how to slide” with a smirk.

Recruiting in the rear-view

Recruiting is a stressful process. Every coach wants your time. Same with the reporters. Oh, and there’s still school, chores and the normal life of a teenager playing football. It can overwhelm the most mature prospects, and it becomes especially difficult when it bleeds into the senior season.

“It is relaxing to have recruiting done before my senior season starts because I can concentrate solely on football and my team,” Rising said. “I’m not talking to coaches all the time and fielding questions. My sophomore season I was getting at least 30 text messages and three phone calls a day.”

Rising said he will enroll early at Texas and sign during the first signing day period in December. He’s excited about the class that Texas is building, though that excitement exists far away from most of the recruits expected to sign with the Longhorns in 2018.

“It is tough living in California and being committed to a class full of players far away from me,” he said. “I know the other top players in my area and they know what I’m about. That’s not true with all the players from Texas because I haven’t been with them on a 1-on-1 basis. I prefer face-to-face contact with anyone. It’s cool to talk on Twitter and all that, but for me to be effective as a recruiter for Texas I want those guys to go on the same official visit as me to Texas so they can talk to me and feel me out and I can feel them out.

“I want them to know me and what I want to do for them as a quarterback at Texas.”

The post Texas QB commit Cameron Rising has turned his injury into a positive appeared first on HookEm.