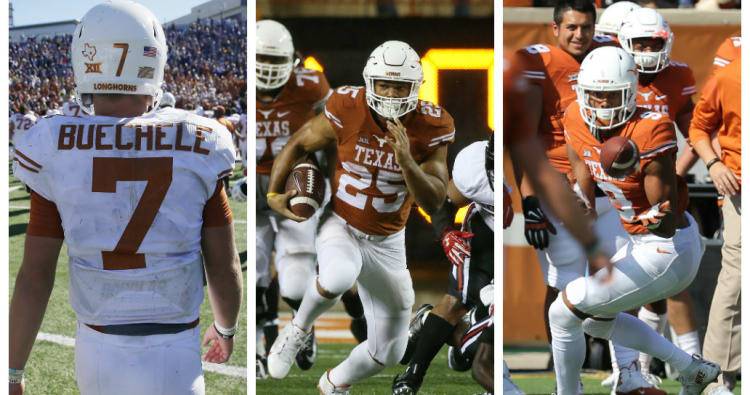 We’re been taking a tour of the top quarterback, running back and wide receiver of each Big 12 team.

Sssh. Nothing is official, but the Longhorns’ starting quarterback probably will be Shane Buechele.

Coach Tom Herman gave it the “if we played today” answer about Buechele in regards to who has earned the No. 1 spot on the depth chart. Buechele started all 12 games a year ago. He was the first Longhorns true freshman quarterback to start a season opener since Bobby Layne in 1944.

When asked about his first-string status this month, Buechele told reporters: “You guys know more than I do.”

Herman’s only other option is true freshman Sam Ehlinger, who has been on campus since January. Ehlinger is the local kid who starred for Westlake High School and who was groomed by a former Texas quarterback (Todd Dodge). About the only thing that stopped Ehlinger in high school were injuries. He had three his senior season alone to his knee, thumb and wrist.

Herman said he likes the play of his quarterbacks so far, but added that no one should be comparing the position to what Texas and Ohio State had when the two schools won national titles.

“It’s not Vince Young. It’s not Braxton Miller,” Herman said. “But we’re good enough to win with (the QB position).”

Meanwhile, Texas also must find a tailback or two to duplicate the production of D’Onta Foreman, who gained 2,028 yards last fall to earn him the Doak Walker Award as the nation’s top running back. Foreman left school early and was drafted in the third round by the Houston Texans.

Chris Warren III is the heir apparent — if he can stay healthy.

A knee injury curtailed his season last year. Then Warren strained a hamstring in the spring. He got the mumps over the summer and then suffered a concussion in preseason camp, but has returned to practice.

Warren, when he’s healthy, has been very, very good. He’s started four games in his career, including two last season. Coincidentally he also has four career games of at least 100 yards. A year ago, Warren (who is listed at 6-4, 250 pounds) gained 95 yards against UTEP, 119 on the road against California and 106 against Oklahoma State. He hurt his knee against the Cowboys. His dad was a three-time Pro Bowler for the Seattle Seahawks.

Kyle Porter also should see playing time. He filled in for Foreman a year ago, playing in 11 games as a freshman. He ran for 205 yards on 46 attempts.

Collin Johnson could be a budding star at receiver. At 6-6, 220, he’s a big, fast target who could excel on the fade passes in the end zone. Johnson caught 28 passes for 315 yards and three touchdowns, which tied for the best among receivers.

The post Triplets of the Big 12: Texas appeared first on HookEm.