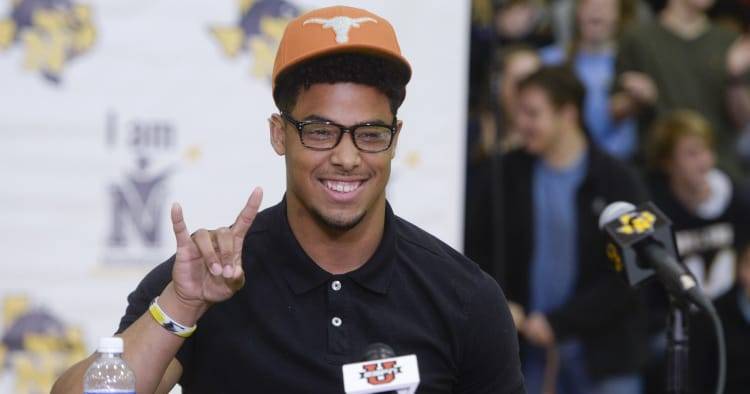 It has been more than four years since EA Sports last released a college football video game, but it appears the company might have sneaked a current Texas Longhorns player into its most recent edition of “Madden NFL 18.”

The resemblance of a photo in the background of the game’s “Longshot” campaign mode didn’t escape notice from Texas fans, who were quick to point it out on message boards and social media.

The photo in question appears on a framed newspaper clipping, which shows fictional character Devin Wade flashing the “hook ’em” sign next to the headline, “Local star Wade chooses UT.”

Or wait, is that really a fictional photo or is it actually a photo taken at the signing of Nagogdoches star defensive back Brandon Jones back in 2016? Check out the placement of the water bottle and Jones’ wristband in the photo below. It’s pretty uncanny.

Why is this a big deal? Well, the reason college sports video games left shelves in the first place is because a couple former players, UCLA basketball star Ed O’Bannon and Nebraska quarterback Sam Keller, sued over having “appeared” in EA Sports games “NCAA March Madness” and “NCAA Football.”

If you’ve ever played one of those games, you’ll know that player names weren’t actually present, but uniform numbers and skill sets, not to mention hometowns, made it pretty obvious who was who. Of course, the NCAA and its member schools were paid handsomely for licensing, while the players themselves received squat.

So the games were shut down. “NCAA Football 14,” released in July 2013, was the last one to hit shelves.

Hence, an active NCAA player appearing in a video game, even for a few brief seconds, wouldn’t be a great look for EA Sports.

The post Did ‘Madden NFL 18’ use an image of a current Texas player? appeared first on HookEm.