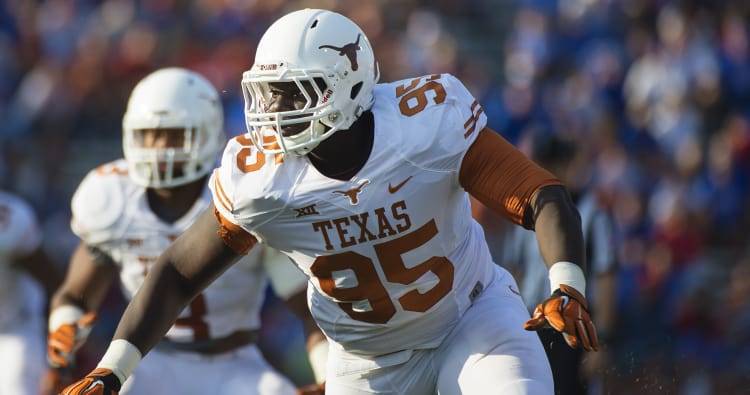 Upon learning Poona Ford had been named a Texas captain, his former coach at Hilton Head High School in South Carolina took to Twitter to share a heartfelt message about the defensive tackle.

B.J. Payne, who is in his sixth season at Hilton Head, said that his team was going through its pregame stretch routine when he glanced at his phone and saw a text from Longhorns coach Tom Herman telling him the news. Payne screen-shotted the message and posted it on Twitter.

Ford, a 310-pound senior, has recorded 102 total tackles, 12.5 tackles for loss and 2.5 sacks during his first three seasons. He was the only player praised by Herman during the first day of spring practice.

Here is Payne’s message in its entirety.

Yesterday Poona Ford was named a captain at the University of Texas. To many they see just a great player & All Big 12 performer. Let me take a minute to tell you about your captain. When I became Poona’s HS Head Coach, the first day we met he told me he was my starting Mike linebacker. I told him no he was my starting 3 tech DT and if he trusted me he would be an All-American.

Football aside, he has impacted more people with his great humanity than he will ever know. From being the kid who ate lunch with my own kids during two-a-days to the kid who always arrived to school with a smile. He worked, and worked very hard for everything he has earned.

When he received his first offer from Toledo, I called my wife, told her…she cried and begged me to wait until she got off work so she could be there when I told him, his dad an his grandma.

When Hurricane Matthew devastated our Island last year, he was the first to call. When our players went out into the community to help, we had over 30 players who chose one day, on their own, to go to his grandmother’s home to pull trees off of her some and make sure she was OK. He has earned the respect of so many.

At 7:16 p.m. during pregame stretch of week one I looked at my phone to check time and saw a text from Coach Herman telling me Poona was named captain. I can say, I cried with pride. Just as many of his HS teachers and coaches did when they texted me or called me last night and today when they found out.

After our victory, I announced to our team that Poona had been named a Longhorn Captain. Our entire team stood and gave him a standing ovation from 1,012 miles away that he never got to hear or see. That’s what you have in a Texas Captain! Hook Em!!

The post Texas DT Poona Ford’s high school coach: ‘Let me take a minute to tell you about your captain’ appeared first on HookEm.

Did ‘Madden NFL 18’ use an image of a current Texas player?