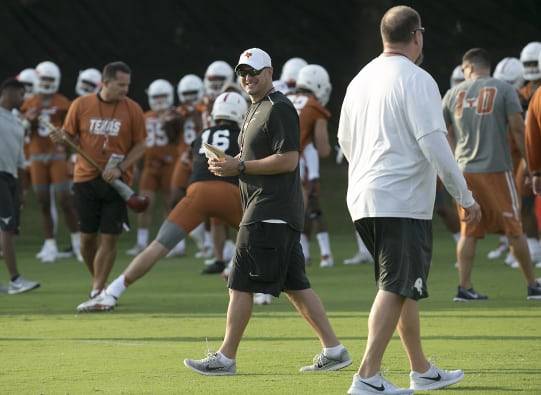 In many instances, the physical transformations among those toiling inside the Moncrief-Neuhaus Athletic Center over the last nine months defy belief.

But has anything changed from a psychological standpoint? Texas, which outsiders have pegged as the nation’s 23rd-best team, opens the season Saturday against Maryland. The reality is that nobody knows what to expect against the Terrapins or throughout the next three months.

The depth chart unveiled Monday is practically the same one that former coach Charlie Strong used during his error-filled 5-7 campaign of 2016. Has this team, now led by dynamic new coach in Tom Herman, learned how to win?

Herman has confidence in the way the coaches have trained the players. But responding in front of a full crowd at Royal-Memorial Stadium against a Big Ten opponent? “That’s a whole other ball of wax,” Herman said.

There were few surprises on the depth chart, at least to those who have been following along throughout August. Sophomore Shane Buechele was listed as the starting quarterback with freshman Sam Ehlinger as his backup. If you’re into parsing Herman’s words, it sounds as if Buechele may be on a short leash, though.

“If we were to play today, Shane would play the whole game as long as he’s playing well,” the coach said.

Warren and Kyle Porter are basically labeled as co-starters since both will play extensively. Collin Johnson, Reggie Hemphill-Mapps and Devin Duvernay were listed as the starting receivers.

Tristan Nickelson will get the first crack at right tackle, although Denzel Okafor will rotate in against the Terps. All-American Connor Williams, Patrick Vahe, Zach Shackelford and Jake McMillon make up the rest of the offensive line, one of the team’s strengths.

Overall, the Longhorns start only three seniors, a slew of juniors and seven sophomores. Hughes is the only starter that’s ever played on a winning Texas football team.

“If you’ve been in our program for the last nine months,” Herman said, “you’re going to be ready to play a college football game if we jog you out there.”

Herman spoke for 30 minutes in a relaxed, carefree manner in the Carpenter-Winkel Centennial Room inside Bellmont Hall. He addressed topics large and small, including that he’d been swapping texts with Houston Texans star J.J. Watt to help with Houston relief efforts.

Herman said the Longhorns had more than 20 players from the Houston area who have been affected by Hurricane Harvey. “Especially now that I know that our players’ families are safe, I mean, what our guys are going through is nothing compared to what the residents of the city of Houston and the surrounding areas are going through,” he said.

Herman will be the sole star on Mondays going forward. After the season begins, no players will be made available to reporters on Mondays as the result of an NCAA rule change that requires athletes get a full day off each week.

The Monday press conference during football season is the best platform Texas athletics has to showcase its athletes and coaches, sports information director John Bianco believes. For example, golf stars Doug Ghim and U.S. Women’s Amateur champion Sophia Schubert both met with reporters on Monday before Herman to talk about their summer and the upcoming season.

But now, media interviews, even ones that promote the player and the program, cannot be done on that specific off day.

Starting next week, football players will have Mondays off; they won’t be made available to reporters until Tuesday evenings. The Longhorns did practice Monday afternoon and took Sunday off this week, as they have throughout training camp. The new scheduling goes into effect when UT’s fall semester begins on Wednesday, a school official said.

The schedule change may sound inconsequential, but it could become harder for Texas to promote its athletes for national awards or All-America status.

Of course, fans care more about what happens on Saturdays than what’s talked about during the week. “This game is inherently fun,” Herman said, “but it’s a lot more fun when you win.”

And for Herman, it’s awfully hard to project how much winning this team can do right now.

“I’m excited to see them play on Saturday,” Herman said. Will this team respond the way Herman wants or will they fall back into bad habits, he wonders. “That will be a big, big crossroads for us to go through.”

The post Texas’ Tom Herman feels Longhorns can win, ‘but again, that remains to be seen’ appeared first on HookEm.