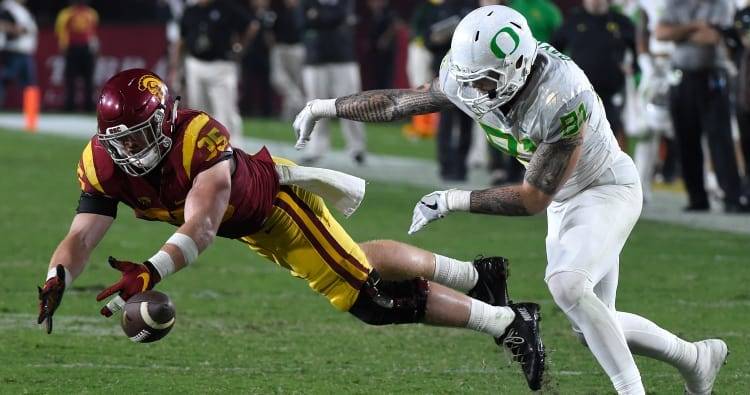 We mentioned that there would be one more USC linebacker on this list. Cameron Smith led the Trojans in tackles last season and returns as the unquestioned leader of the defense. He’s been a star since he stepped on campus, picking up Pac 12 Defensive Freshman of the Year honors in 2015 despite suffering a season-ending knee injury late in the season. Last year, he had 83 tackles and 7.0 tackles for loss from the weak-side linebacker spot.

Smith is moving to middle linebacker, which should suit his strengths. At 6-foot-2, 250 pounds, he is a solid run-stopper who can also play in space when needed. Keeping him in the middle utilizes his experience and size, and it also allows for speedy John Houston Jr. to roam more freely. At Pac 12 media days, Smith dismissed the notion that he could be next in line for the No. 55 jersey previously worn by the likes of Junior Seau and Willie McGinest. Still, get ready to see plenty of No. 35 on Sept. 16.

USC coach Clay Helton has called inside linebacker the team’s thinnest position on defense, which makes a healthy Smith even more valuable. He’s suspended for the first half of the season opener because of a targeting penalty he incurred in the Rose Bowl, which will allow the Trojans to try out a few options. Among them is true freshman and Austin product Levi Jones out of Westlake.

The post Top opponents for Texas in 2017, No. 5: USC LB Cameron Smith appeared first on HookEm.