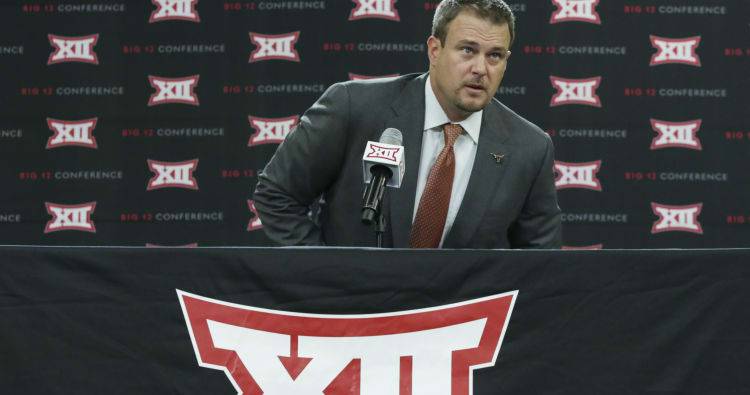 How about catching up on all things Big 12?

Here’s what went down since your favorite teams finished 2016.

Call it an early start for 2017. The Big 12 announced that it will bring back the conference championship and have it at AT&T Stadium in Arlington for the next five years.

The game will match the first- and second-place teams in the regular season.

“Decisions like this are tough to make. The responsibility is not taken lightly,” UT men’s athletic director Mike Perrin said in a statement announcing the firing. “Coach Strong represented The University of Texas with class and dignity, and he demanded our student-athletes do the same by adhering to his system of core values.

“However, after thorough evaluation, the body of work over three seasons has not shown the improvement we were hoping for. This was an important year for our program to take the next step, and the results simply aren’t there, so we’ve decided to make a change.”

Strong, in three years with the Longhorns, never had a winning season. He went 16-21 there.

Texas announced it was hiring Herman to replace Strong. Herman, a one-time UT grad assistant, had emerged as a top name in national coaching searches. His name had trended on Twitter when it was reported that LSU was looking at him.

Herman was introduced at a press conference in Austin.

Two days after Texas Tech’s season ended without a bowl game, athletic director Kirby Hocutt announced that coach Kliff Kingsbury will continue as the Red Raiders head coach and game-day play caller. But Hocutt said Kingsbury must delegate some of his offensive duties to other assistants so he could spend more time trying to fix the defense, the worst in the country.

Texas All-American tailback D’Onta Foreman announced he was leaving school for the NFL. His 2,028 rushing yards led the NCAA through the regular season and he won the Doak Walker Award.

Strong was announced as the new coach at South Florida.

Samaje Perine, Oklahoma’s all-time leading rusher, announced he was leaving school early to declare for the draft. The announcement came hours after he’d broken the school’s rushing record record in the Sugar Bowl against Auburn.

Two days later Sooners tailback Joe Mixon announced he, too, was leaving for the NFL. If only OU had been as fortunate as rival Oklahoma State. In late December, as the Cowboys prepped for the Alamo Bowl against Colorado, quarterback Mason Rudolph and receiver James Washington announced via Oklahoma State’s official Twitter account that the two were staying for their senior seasons.

Over in Lubbock, quarterback Patrick Mahomes devastated Tech fans when he announced he was leaving school early for the NFL. Mahomes said he received a second-round grade from the NFL underclassmen committee. Mahomes, who broke the NCAA record for most passing yards in a game, threw for 5,052 yards and 53 total touchdowns last fall. He also led the FBS in total offense for two straight seasons.

Jan. 9: Baylor gets a quarterback

Reports surfaced that former Arizona starting quarterback Anu Solomon was transferring to Baylor to give the Bears at least two experienced quarterbacks on scholarship. Solomon, a Hawaii native, had never visited Waco before he signed. He led the Wildcats to the Pac-12 championship game in 2014.

A Baylor student, who said she was gang raped by two football players, filed a federal lawsuit alleging that the program used sex to entice recruits.

The woman, who was identified as “Elizabeth Doe” in the suit, also said she was “aware” that 31 Baylor football players committed 52 acts of rape between 2011-14. The lawsuit, however, does not provide any documentation of the rapes. She said some of the Baylor football players recorded the rapes with their cell phones and distributed the videos to their teammates.

The woman said she was a member of the Baylor Bruins hostess program, which helps with football recruiting. She said some of the women engaged in sexual acts with recruits to “help secure the recruits’ commitment to Baylor.”

Baylor fired assistant strength and conditioning coach Brandon Washington after he was charged with a Class B misdemeanor for attempting to solicit a prostitute.

Jabbar Juluke accepted a job with Texas Tech for a second time. He left LSU to become Tech’s associate head coach in charge of running backs. Tech had hired him in 2015, back when Juluke was at La Tech. But Juluke left Lubbock for LSU before he ever could coach a game with the Red Raiders.

Kansas State coach Bill Snyder announced that he’d been diagnosed with throat cancer. Snyder revealed the diagnosis in a statement to the media, saying: “I feel bad having to release this information about my health in this manner prior to sharing it in person with so many personal friends, distant family, players and their families, past and present, and many of the Kansas State football family so close to our program. But, with so much talk presently out there, I certainly owe it to everyone to make them aware of my condition.”

Snyder, 77, was back on the sidelines for K-State’s spring workouts.

Baylor offensive coordinator Matt Lubick, who’d been on the job for less than two months, left Waco to take a job with Washington. Lubick ended last season with Oregon. He took a job with Mississippi in December and switched to Baylor in early January.

OU quarterback Baker Mayfield, a Heisman finalist, was arrested and jailed on charges of public intoxication, fleeing, disorderly conduct and resisting arrest after an altercation in Fayetteville. Ark.. Mayfield called the incident the worst mistake of his life. Mayfield won’t serve a suspension this fall. Rather, the Sooners required him to complete an alcohol education class and do 35 hours of community service.

Herman proved that he was part interior decorator/part demo man when Texas live-streamed the demolition of parts of the locker room. Herman introduced the team to its refurbished locker room on Aug. 2. Each locker, which cost nearly $9,000, features a 43-inch video screen.

Mahomes, as the center of attention at his own draft party in Tyler, was selected with the 10th pick of the first round by the Kansas City Chiefs. He was the only league player to go in the opening round. Otherwise, the Big 12 would have been shut out of the draft’s first round for the first time in its 20-year existence.

Mahomes was the second quarterback off the board after the Chicago Bears traded up to select North Carolina’s Mitch Tribusky with the No. 2 pick.

The NFL draft finished with rounds four through seven. Only 14 conference players were picked, its lowest total ever. Mixon was selected in the second round while Perine fell to the fourth. Cannon and Zamora weren’t even drafted.

Oklahoma coach Bob Stoops stunned the college football world when he announced he was retiring. Offensive coordinator Lincoln Riley was promoted to head coach. At 33. Riley became the youngest head coach in the FBS.

“The time is now because Lincoln Riley will provide a seamless transition as the new head coach, capitalizing on an excellent staff that is already in place and providing familiarity and confidence for our players,” Stoops said in a statement to the media. “Now is simply the ideal time for me and our program to make this transition.”

Gundy, who turned 50 in August, is the most successful, and longest-serving coach in Cowboys history. He has a record of 104-50.

Oklahoma announced that it had signed Riley to a five-year agreement that will pay him $3.1 million a year. Stoops had been the highest-paid coach in the league. Herman now has the honor.

West Virginia confirmed that projected starter Will Grier will be eligible for the season opener. The school said that the NCAA had lifted the rest of Grier’s six-game suspension.

Grier had transferred from Florida. In October 2015 the quarterback was suspended by the NCAA after he tested positive for a banned substance. Grier said he unknowingly had consumed the substance. The NCAA ruled that Grier had to sit out an entire season. But since Grier has not played since 2015 — he sat out last fall as per transfer rules — the NCAA erased the rest of the suspension.

At a fan event in Lawrenceville, Kansas athletic director Sheahon Zenger announced that the Jayhawks were planning a $300 million refurbishment of the football complex. That’ll include an indoor practice facility.

Beaty responded, appropriately, with gushing comments to the media. “It’s exciting for me, because it’s a great time to be at KU. That guy (Zenger) has done so much here, and for him to clear the deck and really make room for football right now — and he’s a football guy at heart — knowing that our fans deserve a really, really nice stadium … we want these people to be comfortable and really enjoy their time there.”

Kansas has been late to the game with football renovations, but a win last November over Texas made folks a bit more generous.

Baylor agrees to release general information behind every alleged sexual assault reported to the school since 2003.

Baylor defensive back Travon Blanchard, who was considered one of the top players in the league, was arrested on misdemeanor domestic assault charges related to an alleged incident that triggered a protective order against him in February.

News of the arrest came hours after Rhule announced at Big 12 media day that Blanchard still was suspended, pending a ruling from the school’s conduct committee.

Blanchard was suspended from all football activities, Feb. 7, when the school received word of the protective order.

Baylor opened preseason football camp, the first of all the Big 12 schools to do so.

The first Big 12 team to play is Oklahoma State, on Thursday.

The post Catching up with the conference: A Big 12 offseason timeline appeared first on HookEm.