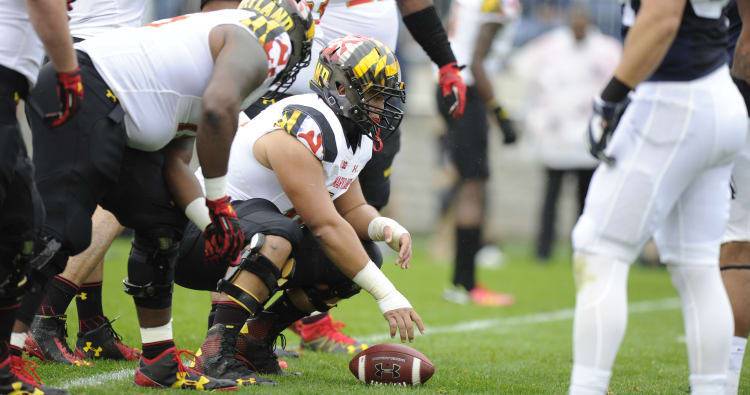 Thanks to the Maryland Terrapins, Lana Moore travels a lot.

Her son, Brendan Moore, is the starting center for Maryland’s football team and a 2014 graduate of Westwood High School. She traveled to make it to a few Terrapins games in 2014, as Moore was redshirting, and then made it to more games the following season. And she didn’t miss any Maryland games last year, trekking from Austin to Saturday battles at Penn State and Michigan and the bowl game in Detroit.

And she doesn’t plan on missing any dates on Maryland’s 2017 schedule either, saying the “flights are booked, the hotels are reserved.”

But she’ll need to travel only a few miles for Maryland’s season opener — against Texas on Saturday, at Royal-Memorial Stadium.

It’s a short trip that she and her husband, Ned Cullen, are looking forward to. (Even though Cullen went to Texas A&M.)

“How cool is it that you get to experience different stadiums and your kid’s playing?,” Lana Moore said. “This one, we kind of know that lay of the land. It’s kind of like our ‘hood, but we’re cheering for Maryland.”

Brendan Moore won’t be hard to spot on Saturday. First off, his mother had T-shirts made with the words “Texas Terp” and his number 64 — the same number he wore at Westwood — on it for family members and friends. He’ll also be lined up in the heart of Maryland’s offensive line.

Maryland, with returning 1,000-yard rusher Ty Johnson, ranked 43rd nationally last year in rushing offense. But the Terps’ line allowed 3.77 sacks a game, one of the worst averages in the country. Only San Jose State, at 4.17, was ranked lower among 128 schools.

Moore, a 6-3, 302-pound junior, is on the preseason watch list for both the Rimington Trophy (given to the country’s top center) and Earl Campbell Tyler Rose Award (given to the best college player who’s from the state of Texas). ESPN NFL draft analyst Mel Kiper Jr. has him as the country’s top-rated underclassman at the center position.

“I would expect a very good increase in production,” Moore said this summer. “We have a new coach (ex-Fordham assistant Tyler Bowen) and he’s amazing. He’s a great technician, he’s a great motivation. I couldn’t say enough about (him).”

One of two Texans on Maryland’s roster, Moore was the school’s first signee from the Lone Star State in 12 years. A three-star recruit who guided Westwood’s 2012 team to the third round of the state playoffs, Moore fielded offers from Boise State, Colorado State, Missouri and Houston. None of the major in-state schools seemed interested, though.

So Westwood coach Anthony Wood reached out to then-Maryland defensive coordinator Brian Stewart — “when you have a kid like Brendan, you pull out your Rolodex and you start calling people,” Wood said. Stewart and Maryland’s offensive line coach eventually visited a spring practice at Westwood. They quickly extended a scholarship offer.

An undersized but fleet-footed left tackle in high school, Moore was recruited as an interior lineman. In 2015 he made his first-ever start at left guard. He started at center in every game last year.

“As soon as I got here, I was told by pretty much anyone that recruited me that I was a guard/center,” Moore said. “It’s not really a surprise, because I knew it coming in that I was a center. I had no illusions of being a 6-2 tackle in the Big Ten.”

Last year Maryland went 6-7 and earned an appearance in the Quick Lane Bowl. Moore, who is majoring in marketing, said the Terrapins are hoping to improve on last year’s record. His hometown team, which is 3-0 all-time against Maryland, just happens to be the first obstacle.

“I’m just going into a good year and trying to build on what we did last year,” Moore said. “We spent all of last year building a foundation and now we’re trying to expand.”

The post Texas’ opener will be a homecoming for Maryland center Brendan Moore appeared first on HookEm.

Pick Six: Previewing the best of the 2017 college football season