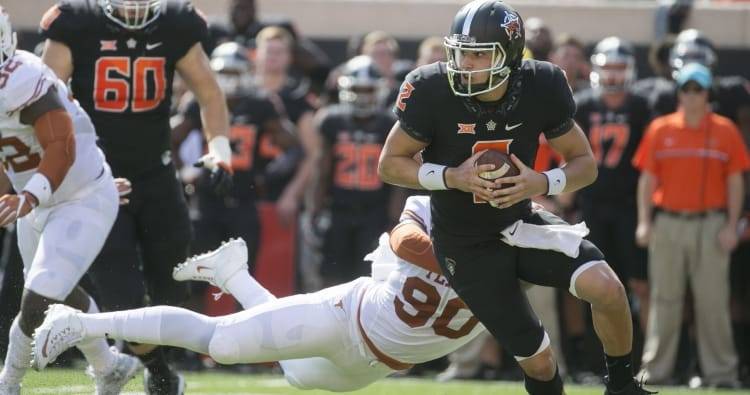 Somehow, Mason Rudolph is still underrated. Despite throwing for 4,091 yards and 28 touchdowns to only four interceptions while completing 63.4 percent of his passes in 2016, the Oklahoma State senior isn’t even considered the best quarterback in his own state. Then again, that shouldn’t be considered too big of a slight when Baker Mayfield is the one keeping him from that title.

Consider this, though: When ESPN did a special titled “College football’s year of the QB,” it had write-ups on 10 quarterbacks. Rudolph landed in the “Other QBs to watch” section. Fans in the Big 12 know better. They know that if the star-studded Cowboys play to their potential, Rudolph is likely to find himself in the Heisman Trophy conversation leading a playoff contender.

As impressive as the Cowboys offense was last season, it has potential to be much better in 2017. Star wide receiver James Washington returns along with leading rusher Justice Hill and leading pass-catcher Jalen McClesky. Marcell Ateman (766 receiving yards in 2015) also returns after missing last season due to injury, and LSU transfer Tyron Johnson is an exciting new addition.

Instead of trying to guard all that talent, teams are likely to try to slow Oklahoma State by sending pressure at Rudolph. That’s easier said than done. The 6-foot-5, 230-pound quarterback is more elusive than he looks and difficult to bring down even when he is caught. He ran for six touchdowns last season and showed a knack for throwing accurate passes under pressure.

Rudolph shredded Texas last year, completing 19 of 28 passes for 392 yards, three touchdowns and no picks. The Cowboys had 555 total yards of offense. In 2015, Rudolph threw for 290 yards, a touchdown and two interceptions as Oklahoma State escaped Royal-Memorial stadium with a 30-27 win thanks to Texas special teams errors.

From Dragons to Longhorns: Nacogdoches DBs to defend Texas’ secondary this fall