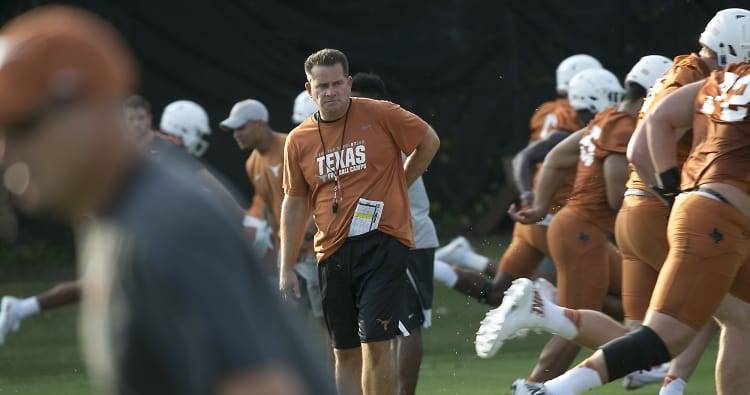 Texas and Maryland’s football teams last played in the 1978 Sun Bowl, and UMD last visited Austin in 1959. The Terrapins, however, won’t exactly be strangers on Saturday.

For Texas, a sense of familiarity will exist on the opposing sidelines. Maryland head coach DJ Durkin – through his current job and a one-year stint as Michigan’s defensive coordinator – has coached against UT offensive coordinator Tim Beck in each of the past two seasons. During last year’s debut at Maryland, Durkin also competed against Texas receivers coach Drew Mehringer.

“I think certainly we’re probably a little more familiar with their personnel,” Beck said on Wednesday.

In a three-game span last November, Maryland played both Ohio State and Rutgers. Ohio State’s offense was co-coordinated by Beck when it strolled to a 62-3 rout on Nov. 12. Two weeks later, Rutgers had Mehringer at the helm of its offense during a 31-13 loss to the Terrapins.

Ohio State scored on 10 of its 14 drives of significance. It compiled 581 yards of offense (328 passing, 253 rushing), and Buckeye quarterback J.T. Barrett accounted for four touchdowns on Nov. 12. Those 62 points were the low point for a Maryland defense that ranked 74th nationally in scoring defense (29.5 PPG).

With far less firepower talent than Ohio State, Rutgers scored far fewer points. Undone by seven sacks and a lost fumble, the Scarlet Knights relied on their passing game to account for 203 of its 350 yards. Rutgers received 1- and 28-yard scoring runs.

Over nine months have passed since those games. Last week, however, Texas coach Tom Herman said that Beck and Mehringer’s experiences against Maryland had not been overlooked.

“We pulled out scouting reports and all that stuff from Rutgers and Ohio State, so we feel like we’ve got a good feel for them,” Herman said. “Week ones are always scary because good coaches find ways to maximize their personnel and put their personnel in positions to be successful. Personnel in college football changes every year, so for them, you’re not sure exactly what you’re going to get.”

Maryland returns defensive coordinator Andy Buh and seven defensive starters. Both Beck and Mehringer will be familiar with senior linebacker Jermaine Carter, Jr., who led the Terrapins in tackles in 2015 and 2016.

Against Ohio State, Carter logged eight tackles and two pass break-ups. He recorded a career-best 15 tackles against Rutgers, and he also had two sacks and a fumble that he forced and recovered.

View from up top: Beck told reporters he will be in the press box on game days. This differs from his predecessor Sterlin Gilbert, who preferred to be on the sidelines.

The post Against Maryland, Texas can lean on offensive assistants’ backgrounds appeared first on HookEm.

The Big 12 of the Big 12: Our annual list of the conference’s best dozen players

Longhorns in the NFL: Longhorns receivers score in “dress rehearsal”