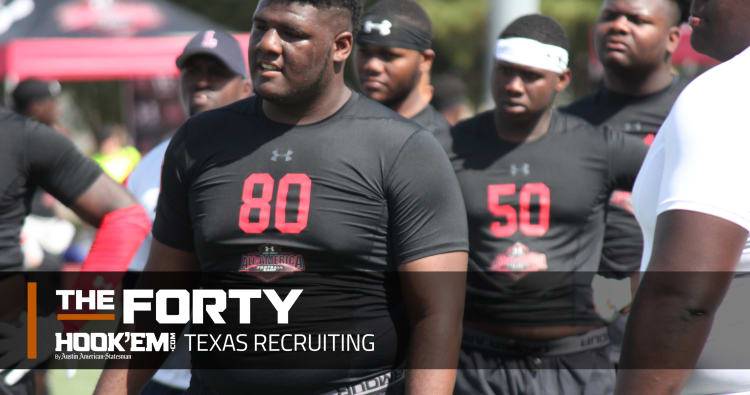 Stay updated on the latest Texas Longhorns recruiting news brought to you by Mike Craven of Hookem.com. The Forty will publish M-F at 10 a.m. CT each morning to provide Texas fans with an in-depth look at the latest for the Longhorns on the recruiting trail.

Defensive line remains one of the only concerns for Texas for the 2018 recruiting class. With 18 prospects committed, defensive line and cornerback are the only positions on offense or defense without at least two players pledged. The Longhorns feel good about their chances at remaining cornerback targets like D’Shawn Jamison and Anthony Cook, but what’s the plan along the defensive line?

Keondre Coburn, a 4-star defensive tackle from Spring Westfield, is Texas’ only committed defensive lineman in the cycle. The top target remaining on the board at the position is Brown, a fellow four-star from the same high school as UT quarterback Shane Buechele. Brown’s junior tape left something to be desired but his frame and athleticism are unteachable for prospects his size. That combination led to offers from power programs like Alabama, Oklahoma and Texas A&M. Alabama is considered the leader, but Texas is still in the mix and should get him on campus for an official visit before national signing day.

Perkins is expected to join Carson on the official visit to Texas on Sept. 9 for the San Jose State game. Perkins participated at The Opening Final and is ranked the No. 5 weak side defensive end for 2018. Perkins, defensive end target Daniel Carson and UT linebacker pledge Ayodele Adeoye all have a Missouri connection and have hinted on Twitter to possibly heading to the same college.

The Longhorns are without a commitment from a defensive end and it’s looking more likely like they’ll need to go out of state to solidify a commitment or two from a player with Max Wright now committed to A&M and Joseph Ossai likely to follow. Carson is set to visit Texas on Sept. 9. It will be his first time on campus. His frame and ability to play end or tackle at the college level is ideal for defensive coordinator Todd Orlando’s odd-man front.

Texas isn’t done at the wide receiver position for 2018 despite already holding three commitments from 4-star prospects who showcased at The Opening Final. Houston Episcopal slot receiver Jaylen Waddle is one of UT’s top remaining targets. He’s ranked No. 13 on the Fab 55 and holds more than 20 offers.

Expect the Longhorns to make the cut even if schools like Alabama, A&M and Oregon appear to be in better position. He’ll narrow his focus to a smaller amount of programs on Sept. 17.

The post Texas set to host a pair of out-of-state defensive ends in September appeared first on HookEm.

Total alignment: Tom Herman is transforming Texas with his vision, messaging and plan