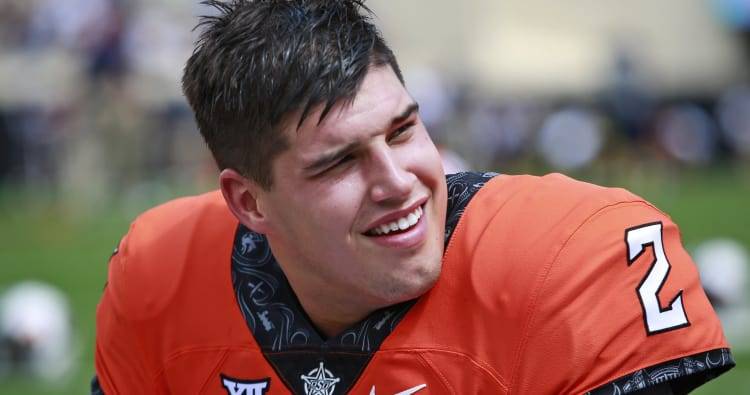 What’s that old quarterback adage? If you can’t figure out where the safety is, you’re destined to throw another pick.

It’s what an offensive coordinator always talks about when he calls over his quarterback after a throwing error.

Mason Rudolph took the study of interceptions to a much deeper level in the offseason. Oklahoma State’s senior quarterback scrutinized video of his past foibles as he prepped for this season. There was an interception in early September, then another one two games later. Skip through all of the October film. There were two in early November. Same game. Lesson over.

Rudolph threw four picks among his 448 throws over the Cowboys’ 13 games in 2016. For better context: For every interception Rudolph threw, there were at least seven touchdowns.

There’s no reason to believe that Rudolph, who has started since November of his freshman year, will take a step back in his game, especially given that the Cowboys return a wealth of offensive talent. We think Rudolph will only get better, which is why he tops the American-Statesman’s annual Big 12 of the Big 12 list of the conference’s top dozen players regardless of position.

Oklahoma quarterback Baker Mayfield is second. But unlike Rudolph, he doesn’t have an experienced and impressive supporting cast of skilled players. Mayfield can ab-lib, but he can’t work miracles. Rudolph can lean on receiver James Washington, the No. 3 player list, and tailback Justice Hill, who is “on the radar.”

The preseason list, which will be updated later in the season, is filled with offensive players — it is, after all, the big-play Big 12. There are nine of them on the list. Kansas defensive end Dorance Armstrong is the top defensive guy on the list, coming in at No. 6.

Rudolph’s lack of real mistakes a year ago was a key reason the Cowboys were 10-3. His worst game in terms of interceptions came against Kansas State on Nov. 5. Rudolph made up for the miscues with two late scoring drives, including an 82-yard touchdown pass to Washington, to win the game, 43-37. Besides the pair of picks, Rudolph also set career highs for completions (34), attempts (55) and touchdown passes (five).

Rudolph hasn’t thrown an interception since that night in Manhattan. He comes into the season opener against Tulsa on Thursday night with a streak of 123 consecutive passes without a pick. His longest streak last year was 164 straight.

It’s reasonable to expect that a team with a senior quarterback, dynamic receivers, a 1,000-yard rusher and a consistent line will compete for a Big 12 championship.

“Everyone’s locked in,” Rudolph said. “Everyone wants to use every single second of preparation to kind of maximize their reps.”

Mayfield could be the best player in the league. He’s already receiving Heisman love as the other option to Louisville’s Lamar Jackson, who won the trophy last year. There’s a compelling argument for Mayfield to be at the top. He finished third in last year’s Heisman vote and he’s handled the starting job with the Sooners for two seasons. His game almost is as clean as Rudolph’s. His offensive line is terrific. But there are way too many unknowns regarding the OU tailbacks and receivers.

His career numbers are exceptional. Washington’s reception yardage (2,923), touchdowns (26) and yards per catch (19.2) are tops among returning receivers who compete for teams in Power 5 leagues. He’s also one of five Cowboys receivers to sport multiple 1,000-yard seasons.

Offensive linemen don’t generate many stats. But here’s one that stood out for Williams: He allowed only one sack in 2016. Plus he was the lead blocker for All-American tailback D’Onta Foreman, the Doak Walker Award winner. If projections hold, Williams could be the top offensive lineman selected in next year’s NFL draft. He’ll have to make the decision whether to leave early, though. He lost 19 pounds of fat and added 12 pounds of muscle to his 6-foot-6 frame to get ready for this season.

If Williams isn’t the best lineman in the league, then it’s Brown, who’s two inches taller and 30 pounds heavier. Brown, whose dad played in the NFL, is the leader of what is rated as the top offensive line in the Big 12. Mayfield proclaimed that Brown and the rest of the guys on his line were so good, he could be the Sooners’ starting tailback.

This disruptive Jayhawk is considered the top defender in the league. He was a unanimous all-conference first-team selection last fall when he registered 10 sacks, second-best in the league. His 20 tackles for a loss topped the Big 12. His stat line also included 56 total tackles, three forced fumbles, five quarterback hurries and two fumble recoveries.

He’s headed into his fourth year as a starter and is viewed as the best defensive back in the Big 12. Thomas is a two-time all-conference pick. He registered 17 pass breakups last fall, including four in the first half against the Longhorns.

The conference’s best returnmen usually come from Manhattan. One of them has been named all-conference in six of the last eight years. Pringle could pad the streak. His 28.7-yard average per kick return was tops in the league in 2016. He also had a penchant for big plays, with a 99-yard kick return and pass receptions of 83 and 79 yards.

His 130 tackles led the Big 12 a season ago, when he was first-team all conference. Of his total tackles, 72 were solo. The total ranked ninth nationally and was the third best in Gary Patterson’s 16 years at TCU. He’s surpassed 100 tackles in each of the last two seasons.

Lazard was so consistent last fall that he posted 100-yard receiving games six times. That was second best in the conference and 12th nationally. His 69 catches led Iowa State. So did his yardage (1,018) and touchdown catches (seven).

Had a very slow start to 2016. But he had a wow ending, amassing 221 receiving yards against Baylor. Even when the quarterbacks change, a Red Raiders wideout always will have eye-popping production. It’s Coutee’s turn to dominant a stat sheet.

How our final list of the league’s 12 best players looked at the end of last season, including where they ranked on our 2016 preseason list. Bolded players are back in 2017:

The post The Big 12 of the Big 12: Our annual list of the conference’s best dozen players appeared first on HookEm.

Where to get clear bags for Texas Longhorns games

Against Maryland, Texas can lean on offensive assistants’ backgrounds