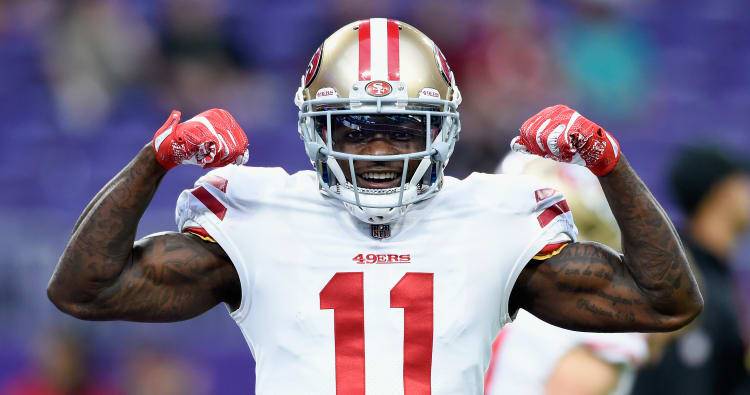 Marquise Goodwin, former UT receiver and track star, has been doing great things on and off the field over the past couple of weeks. Sunday he had just one catch in the 49ers 32-31 loss to the Vikings, but it was a 46-yard bomb for a touchdown. Of course, he celebrated the way a speedster would.

Earlier in the week Goodwin had a touching moment with a fan who was at a meet-and-greet with the Make-A-Wish Foundation.

“Just know that you got a lot of people that love you & care about you, including the #49ers” – @flashg88dwin

Jamaal Charles made the most of his lone appearance in the preseason, rushing four times for 27 yards and catching two passes for 15 more. His 6.8 yards per carry average was reminiscent of this better days in Kansas City. It was thought he was in danger of being cut, but if Saturday’s performance is any indicator, you have to think he’s on the squad.

Marcus Johnson caught just two passes for three yards, but one of those receptions was the game-winning touchdown early in the fourth quarter. His grab in the corner of the end zone lifted the Eagles to a 38-31 win over the Dolphins last Thursday.

Malcolm Brown was impressive in his start in place of Todd Gurley. He rushed nine times for 44 yards and caught a pass for 22. Brown averaged 4.9 yards per carry in the game and has solidified himself as Gurley’s main backup.

Derrick Johnson had four tackles in the 26-13 loss to the Seahawks. He tweeted this out Wednesday in hopes of helping the victims of Hurricane Harvey.

Proud to support. We can all help. We are all #HoustonStrong. ALL proceeds go to #Harvey relief

Colt McCoy, Redskins—The former UT quarterback once again looked sharp, connecting on 8-of-11 passes for 76 yards and a touchdown.

Earl Thomas, Seahawks—Thomas had the second most tackles in the win over the Chiefs, making four on the night.

Hassan Ridgeway, Colts—The defensive tackle didn’t make a tackle but he came up with a fumble recovery in the 19-15 win over the Steelers in the first quarter.

Kenny Vaccaro, Saints—Vaccaro made four tackles in the 13-0 win over the Texans Saturday. That was second best on the team.

Quandre Diggs, Lions—Diggs made three tackles in the Lions’ loss to the Patriots. He added a tackle for loss.

Phil Dawson, Cardinals—Dawson hit a 50-plus yard field goal for the second week in a row, connecting on a 54-yarder in the Cardinals’ 24-14 win over the Falcons.

Brian Orakpo, Titans—He had one tackle in the 19-7 loss to the Bears. The linebacker out of Houston Lamar has had a lot on his mind this week. Orakpo, like J.J. Watt, has started a foundation to help victims of Hurricane Harvey, as reported by ESPN.

Duke Thomas, Cowboys—The defensive back didn’t make a tackle or break up a pass, but he’s trying to contribute on special teams. He had one kickoff return for 24 yards in the win over the Raiders.

Nick Rose, 49ers—The former UT kicker is trying to give veteran Robbie Gould a run for his money. Rose made his only field goal attempt in the loss to the Vikings, a 55-yarder.

Jordan Hicks, Eagles—He’s dealing with a groin injury so he didn’t suit up for Thursday’s win over the Dolphins. Hicks expects to be ready for the opener.

Fozzy Whittaker, Panthers—Whittaker returned a kickoff for 10 yards and had just one carry for 13 yards in the 24-23 win over the Jaguars.

Adrian Phillips, Chargers—The defensive back had a tackle and broke up a pass in the Chargers 21-19 win over the Rams.

Malcom Brown, Patriots—Brown had a single tackles in the 30-28 win over the Lions.

Paul Boyette Jr., Raiders—The rookie is trying to make the team and contributed two tackles in the 24-20 loss to the Cowboys.

Geoff Swaim, Cowboys—Swaim made one catch for 7 yards in the win over the Raiders. He’s looking like the third, maybe fourth once Rico Gathers returns, option to catch passes as a tight end.

Caleb Bluiett, Jaguars—He didn’t log a stat in the loss to the Panthers and he appears to be a long shot to make the team with three tight ends ahead of him on the depth chart.

Lamarr Houston, Bears—Houston looks for a bounce-back year, as he had a sack in the Bears’ 19-7 win over the Titans.

Sam Acho, Bears—Acho failed to record a stat in the win.

Roy Miller, Chiefs—Miller made his debut with the Chiefs in Friday’s loss to the Seahawks. He had hamstring spasm in the game, but Andy Reid doesn’t think it’s serious, according to Chiefs reporter Matt McMullen.

Tyrone Swoopes, Seahawks—The former Texas signal caller didn’t make a catch in Friday’s win over the Chiefs, but he’s still in position to make the team as the fourth tight end. He no longer has to deal with competition from Marcus Lucas who was waived, but it remains to be seen if the Seahawks end up keeping four tight ends.

Keenan Robinson, Giants—The linebacker still isn’t practicing as the result of a concussion suffered on Aug. 3.

D’Onta Foreman, Texans—The rookie missed Saturday’s “dress rehearsal” game due to a leg injury. He played great in his first two games, but his current injury appears to be somewhat of a mystery.

Alex Okafor, Saints—Okafor didn’t log a stat in the win over the Texans, but he’s looking to start for the oft struggling Saints defense this season and appears to have the inside track.

Trey Hopkins, Bengals—The former Longhorn is looking to take a starting guard spot, and the Bengals rushed just for 137 yards in Sunday’s 23-17 loss to the Redskins.

Kent Perkins, Bengals—While Hopkins is making a push to start, undrafted rookie free agent Perkins is hoping to land a roster spot. It’s possible he ends up on the practice squad.

Brian Robison, Vikings—He missed the win against the 49ers with a leg injury, but the veteran should be healthy for the opener, according to the Star Tribune.

The post Longhorns in the NFL: Longhorns receivers score in “dress rehearsal” appeared first on HookEm.

Against Maryland, Texas can lean on offensive assistants’ backgrounds