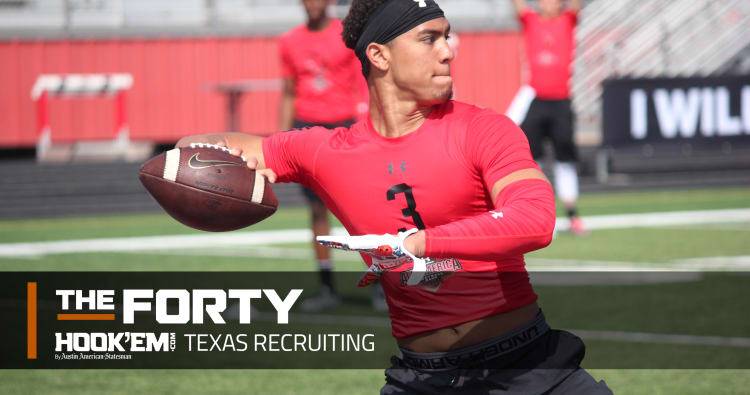 The first weekend of September is normally a celebration of one of Texas’ favorite pastimes. Football and Texas are synonymous and Week 1 of the high school season is here for most of the state. All five of the Longhorns’ out-of-state commits will be in action, as will the in-state pledges in areas that haven’t been affected by Harvey.

games this week have been cancelled. Will update you later in the week. Please stay safe and stay inside. Love you all!!

Football takes a backseat for six of Texas’ 2018 commits. Games were canceled for 5-star safety B.J. Foster and four-star talents Al’vonte Woodard, Keondre Coburn, Malcolm Epps, Jalen Green and Brennan Eagles. Those six commits make up a third of the 2018 class, which ranks No. 2 in the country, per 247Sports’ composite.

The prospects are hopeful their season starts in Week 2.

Here’s where to find Texas’ 2018 commits in action this week:

Where: Handley Field (Fort Worth)

One of Texas’ quarterback commits started his season last week, and he did so in fashion. Rising completed 17 of 21 passes for 353 yards and five touchdowns. And he did in in just over two quarters of action. Newbury Park plays its first away game Friday night against Agoura.

Trinity is 2-0 with victories over two Indiana powerhouses. Moore was influential in both, showing his versatility by racking up yardage as a returner, a receiver and a rusher. Trinity, which ranks as the No. 18 prep team in the country on MaxPreps.com, plays its third consecutive out-of-state opponent Friday when Ohio’s Archbishop Moeller comes to town.

It’s a new season and a new program for Texas quarterback commit Casey Thompson. The four-star transferred from Southmoore High School this offseason and was recently granted eligibility at Newcastle to play his senior year. He’ll begin his career at Newcastle with a road game against in-state rival Noble High School.

IMG Academy began its march toward a mythical prep national title with a televised victory over Chandler (Ariz.) and Adeoye made and impact from his linebacker position in his first game. The former St. Louis product showed instincts and open-field tackling ability when he played. The star of the opener was 2019 Texas target, running back Noah Cain, formerly of Denton Guyer. IMG takes on Centennial (Calif.) Saturday night. Centennial is home to 5-star Texas target Tanner McKee.

The JUCO season for tight end commit Dominick Wood-Anderson begins Saturday on the road against Eastern Arizona. Wood-Anderson is the No. 1 ranked JUCO tight end in the class and chose the Longhorns over Alabama and Oregon.

The post The Week 1 guide to watching Texas commits in action appeared first on HookEm.