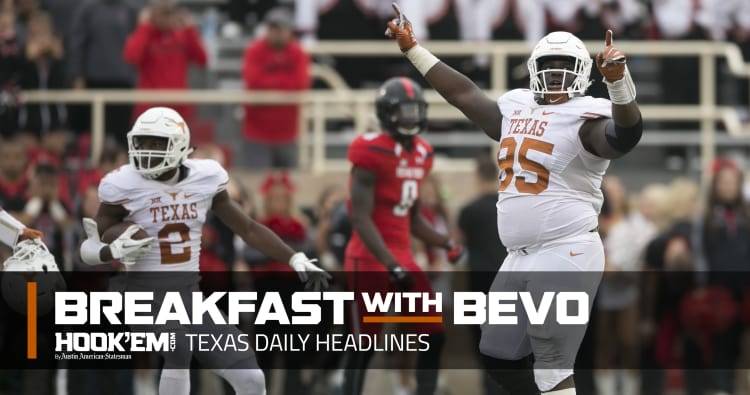 Tom Herman must win football games. In order to do that, he must be half-coach, half-CEO. The way he plans to make that work is through total alignment. Herman has his hands in nearly every aspect of the UT football program, and that’s the way it’s got to be.

Poona Ford lets his play do the talking

Poona Ford’s days as a middle linebacker ended when he met B.J. Payne. That’s when the scholarship offers started rolling in, Ford told the Austin American-Statesman’s Cedric Golden. Though the defensive tackle doesn’t speak much—head coach Tom Herman says he isn’t sure he’s heard Ford say more than 10 words since he was hired last year—his play and effort has earned him a spot as team captain.

Beck and Mehringer no strangers to Maryland

When the Longhorns face Maryland Saturday, they can look to their offensive coordinator and receivers coach to help familiarize themselves with the Terps. Offensive coordinator Tim Beck and receivers coach Drew Mehringer each faced Maryland last season. The Terps played Ohio State, where Beck guided the offense, and Rutgers, where Mehringer was OC, in a span of three games.

The Longhorns will host a pair of defensive ends in September. Daniel Carson and Ronnie Perkins are expected to visit UT when it hosts San Jose St. on Sept. 9.

Way-too-early bowl projections for the Longhorns

American-Statesman reporter Suzanne Halliburton ranks the dozen best players in our annual list of the best players in the Big 12. D’Onta Foreman was No. 1 at season’s end in 2016. Longhorns left tackle Connor Williams ranks fourth to start the season.

Longhorns in the NFL: Receivers score in “dress rehearsal”

Marquise Goodwin of the 49ers and Marcus Johnson of the Eagles each scored in the third week of the preseason to highlight the week of Longhorns in the NFL.

With the Texas coast and the city of Houston dealing with Hurricane Harvey and its aftermath, some Longhorns are looking to help J.J. Watt raise money for those affected.

Colt McCoy connected with Jordan Shipley one more time in an effort to help those affected by Hurricane Harvey and its ensuing rainfall. Shipley and friends of McCoy are using the quarterbacks boat in efforts to help evacuate those stranded by the storm.