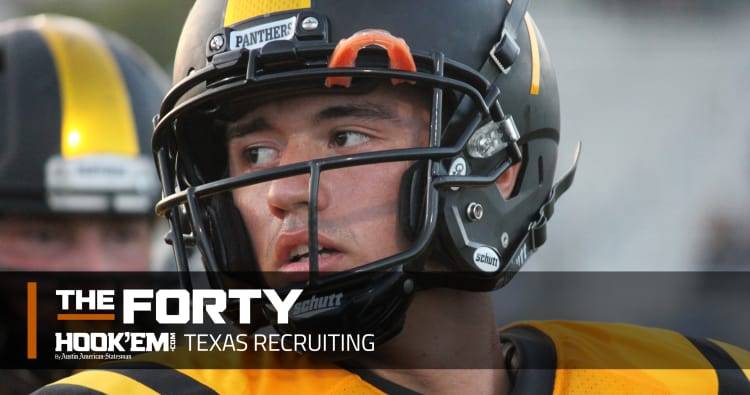 The young pup grows up

Competitiveness was a trait forced upon Texas quarterback commit Cameron Rising. He’s the youngest of three athletic brothers and the son of an alpha-male. It was his destiny to shine against kids his own age. Rising was fighting bigger competition his whole life.

“Tyson used to manhandle Cam, but Cam never backed down,” recalled their father, Nicko. “I was probably even harder on the kid in competitive settings like 1-on-1 in basketball and ping-pong. He hated to lose.”

Cam — a four-star quarterback prospect from Newbury Park, Calif. — would figure out a way to win. By the time he was in middle school he was a budding star on the basketball court. He admits basketball, not football, was his first love, and it’s also where Nicko first saw the poise and hate-to-lose attitude that would come to define his youngest son as a high school football player.

The Risings don’t mind trash talk. It comes with forging a strong-willed personality on and off the field of play. Nicko let his son know when he beat him repeatedly in games growing up, so Cam found his turn in a game of 21 after a day of middle school.

“Cam beat me the day before and wouldn’t be quiet about it, so I told him he was getting beat in 21 when he was done with school,” Nicko recalled. “I crushed him the first game and he demanded we played 2 out of 3 for $40. I was up 18-3 in the second game before I missed my free throw, he scored and ended up beating me in the next two games.”

That doesn’t mean Cam and his family don’t share a bond. Cam was always trying to find ways to help his older brothers, like the time his grandfather offered him a new gaming system if he scored four goals in a soccer game in elementary school.

“Cam was up to nine goals in the second half and I didn’t understand why he was out there scoring so many goals and playing so hard when the game was lopsided,” Nicko said with a laugh. “He looks right at me and says, “Dad, if I score 12 goals then grandpa will have to buy my brothers the game, too.”

A football star is born

Football wasn’t Rising’s first love. That distinction fell to basketball. It changed in the eighth grade when his dad made the decision to move Cam to quarterback with the help of a local youth league coach, Matt Rosene. California doesn’t sanction middle school football like it does in Texas, so youth league football dominates the landscape until ninth grade begins.

“I had an epiphany that he needed to be a quarterback and Matt is a legendary youth league coach and quarterback coach in the area,” Nicko said. “I said, ‘Matt, you got to come back to coaching and play Cam at quarterback.’”

It worked. Rising could throw the ball only 30 yards when his eighth grade season began. But he was throwing on-target 50-yard passes by the time he arrived at Newbury Park High School.

“It wasn’t until about eighth grade when I started playing quarterback that I really fell in love with football,” he said “The grind of a game. The 5-yard runs to build up a touchdown. There is no better feeling to me.”

It was during this time that Rising began to show his work ethic and drive to become a star quarterback.

“That kid wanted to play quarterback so bad that he went out there twice a week, and on Sunday he’d be running and doing drills on throwing,” said Rosene, Cam’s youth coach. “He’s hard-working. If he was 6-foot-5, he’d be Cam Newton. He’s only 6-foot-2, so he’ll be Cam Rising.”

Cam was a household name by his sophomore season when he finished the year with 40 touchdown passes to just one interception. Recruiters came by the house, but not for Cam. Tyson, was being recruited as one of the top junior college players in the cycle.

“Cam just wanted one offer,” Nicko said. “It was his dream, so every time a coach would come by and talk to Tyson, I’d get into their ear about Cam. Eventually Washington State offered. A few offers later, LSU and Michigan offered. After that it went from zero to 100 quick.”

It was during this time that Rising met Tom Herman. At the time, Herman was at Houston and was recruiting Tyson. Cam and Herman hit it off and Herman began recruiting the youngest Rising to lead the UH program at quarterback. The only problem was that the Risings figured Herman wasn’t staying long at Houston.

“Herman wanted him at Houston, but we knew he wouldn’t be there long enough,” Nicko said.

Rising was committed to Oklahoma when his family took a midweek trip to Austin before the weekend of the Orange-White game. It wasn’t a trip many in the media knew about; he was trying to avoid a media meltdown for visiting Oklahoma’s rival just a week after the Sooners’ spring game.

The No. 1 rule of recruiting is to win the mom. Herman reached back to the past to lure in Cam’s mom, Eunice Rising. Herman and Eunice went to the same high school and when the family arrived on that visit to Texas, Herman was there to greet them with the elementary school song.

“It blew my mind he knew the school anthem of my elementary,” Eunice said. “He took me back when he did that. As a mom, I felt like Cam was already home.”

Rising waited a week before his dad received a text stating the four-star quarterback was ready to flip to Texas. Nicko, as parents tend to do, already knew the Longhorns were in good shape to land his son’s commitment.

“I knew Herman wanted the Texas job when he was recruiting Cam to Houston. That was his dream job and Texas wasn’t having much success,” Nicko said. “I knew when he got the job at Texas, Cam would look at Texas.”