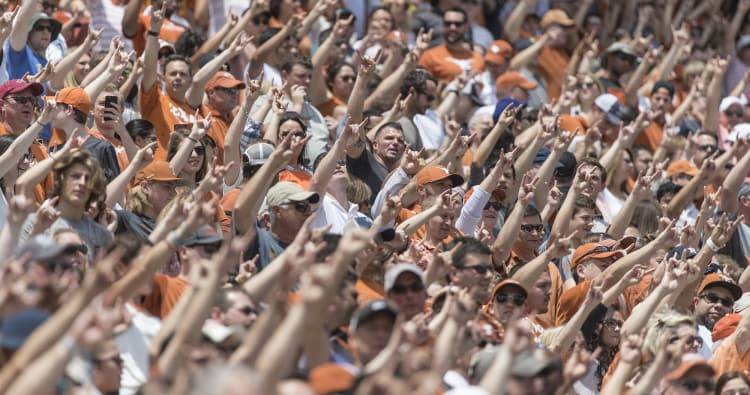 Stop for a moment and think about all the dysfunctional upheaval the University of Texas has been through this decade.

Members of the UT System Board of Regents were at war with each other. A UT president who battled with regents was ultimately pushed out. The school hired an athletic director who alienated darn near everyone. The football coach hired to replace a 16-year legend was crushed under the weight of the job itself.

Considering all that, why should anyone be surprised the Longhorns haven’t been nationally relevant since 2009?

The Herman era, one that could signal the start of real stability for UT athletics, begins Saturday at Royal-Memorial Stadium against Maryland. Whether you agree with preseason rankings or not, the Longhorns begin the year ranked 23rd in the Associated Press Top 25. The last time Texas opened a season ranked was 2013.

From opponents to the casual fan, “If they can say, ‘Wow, I’ve never seen Texas play with that much passion, energy, accountability to their teammates and coaches,’ then we’ll be on our road to success,” Herman said this week.

RELATED: Kirk Bohls’ predictions for Texas’ season — all 36 of them

Do not discount the importance of stability throughout the organization, or in Herman’s parlance “alignment.” He didn’t just tell administrators the school needed faculty upgrades, he showed them.

Herman and Perrin talked about improving the game day atmosphere. The school poured another $6 million into improvements. Fans will see an upgraded video board over the south end zone and a better sound system.

Perrin and Fenves did their part. So did the UT regents. The board approved Herman’s five-year contract with $25 million in guaranteed money. They also rubber-stamped a $1-million deal for defensive coordinator Todd Orlando, the highest annual contract ever for a UT assistant.

For the first time in years, Texas has total alignment off the field. What about on it?

Every successful program needs stability at quarterback. Sophomore Shane Buechele started all 12 games last season and rewrote the freshman record book. Still, he had to fend off a challenge from Westlake’s Sam Ehlinger this spring and summer.

“We’re gonna ride with him as long as he’s gonna drive us,” offensive coordinator Tim Beck said. “If for some reason he doesn’t, and we feel like it’s in the best interest of out football team we have to make a change, then we will.”

Beck said he hates the phrase “having a leash” on a quarterback. He expects Buechele to cut it loose against the Terrapins. “I think he’s going to play lights out. I really do,” Beck said.

Can Buechele slam the door on Ehlinger, highly touted 2018 recruits Cameron Rising and Casey Thompson or anyone else this coaching staff lures to Austin?

“That’s what I’d like to do,” said Buechele, who could conceivably be UT’s starter through 2019; the Longhorns haven’t had a quarterback start four years since Colt McCoy. “Once you get the spot, you don’t want to give it up. That’s anybody. But it’s going to be a constant competition. You have to try to close that door every single day, every rep you take.”

Buechele has plenty of weapons at his disposal. The overwhelming majority of them are underclassmen, another sign of potential on-field stability. Collin Johnson, Reggie Hemphill-Mapps and Devin Duvernay all have their best days ahead of them.

Texas is likely to lose All-American left tackle Connor Williams, a junior, after this season to the NFL draft. Otherwise, everyone else should return. Right tackle Tristan Nickelson is a senior, but he may lose the starting job to sophomore Denzel Okafor before it’s all said and done.

On defense, only two starters are seniors — defensive tackle Poona Ford and linebacker Naashon Hughes. Both are team captains, along with Williams and nickel back P.J. Locke III.

But, as Orlando said, “A Tom Herman-run program is just different. We’re different.”

“These coaches, each and every day, they preach family and unit pride and things like that,” Hughes said. “I would say that’s a core or foundation of what the team should be about — family, each and every person caring about one another. You can see and feel a love and family bond here,” he said. “Everybody else has preached it, but you get it non-stop now. It’s every day.”

Texas players have leaned on team-building talk before. Summertime barbecues were supposed to fix the 2015 squad. A ping-pong table was used to make the different last season. Neither worked.

The feeling inside Moncrief now is that Texas is run like a mini-pro franchise, which is how it’s supposed to feel. Every day, Herman determines winners and losers through various competitions. That’s what the players came here for, remember? To win?

“I do believe these guys,” Herman said. “There’s a lot of them now that are doing things because they have conviction, that it’s the right way to do things rather than, ‘Hey, I don’t want to get in trouble so let’s do these things.’”

The Texas administration is fully supportive of Herman. His coaching staff has convinced the players to change their ways. The players themselves certainly look bigger and stronger under strength coach Yancy McKnight. This program appears to have reached a perfect equilibrium.

The post Now that things are stable with Texas football, can the Longhorns start winning again? appeared first on HookEm.