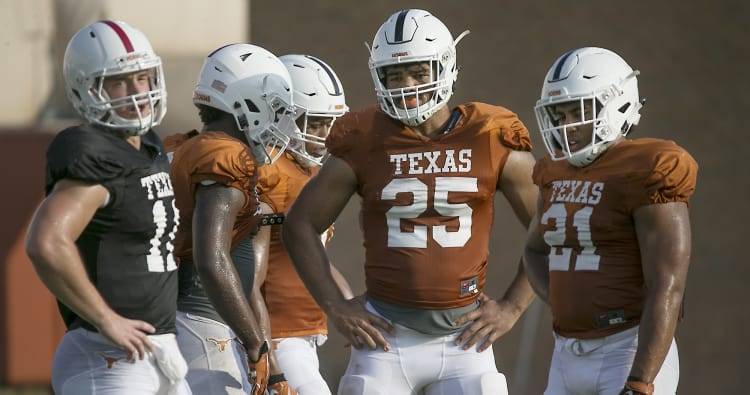 Four questions facing No. 23 Texas in Saturday’s game against Maryland:

1. How will Texas replace D’Onta Foreman?

Texas opens the season with a 2,028-yard hole in its backfield since Foreman is now in the NFL. The top three backs on UT’s depth chart — Kyle Porter, Chris Warren III and Kirk Johnson — have injury concerns, and Daniel Young and Toneil Carter are freshmen. Warren, though, has a 276-yard game in his career, and Porter averaged 4.5 yards per carry in limited action last year. Whoever gets the ball will do so against a Maryland rushing defense that ranked 99th in the nation last year.

2. Will Sam Ehlinger make an appearance — outside of garbage time?

All signs point to incumbent starter Shane Buechele returning to the huddle. Texas coach Tom Herman indicated Monday the quarterback job was Buechele’s to lose, and he didn’t seem inclined to play both Buechele and Ehlinger, a 4-star signee from nearby Westlake, against the Terrapins. That likely means Ehlinger won’t play meaningful minutes unless Buechele struggles or UT throws a curveball at the Maryland defense.

3. Will any newcomers step up on defense?

Last year, Texas ranked 90th nationally in scoring defense (31.5 PPG), 76th in rushing defense (189.8 YPG) and 105th in passing defense (258.5 YPG). UT returns plenty of defensive starters, but did it add any reinforcements? Is help on the way in the form of JUCO transfers Gary Johnson and Jamari Chisholm? What about Ta’Quon Graham, a four-star lineman out of Temple? Will Josh Thompson join fellow Nacogdoches native Brandon Jones in the secondary?

4. Are Texas fans ready for some football?

After three losing seasons, fans are hungry for a winner. The only question is whether they’ll cautiously approach the box office at Royal-Memorial Stadium. A few months ago, Texas had an unimpressive crowd at the Orange-White game. That spring scrimmage, though, also was held on Easter Weekend and it’s not like fans quit showing up at DKR last year. (UT ranked eighth nationally in attendance).

The post Texas vs. Maryland: 4 questions facing the Horns appeared first on HookEm.