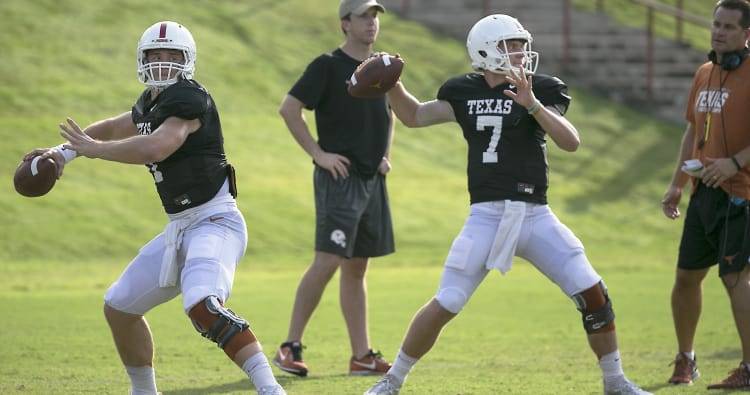 Here are five key matchups in the Texas-Maryland game to keep your eye on Saturday:

Buechele should be the quarterback when the offense makes its first appearance. His first test will come against a Maryland defense that ranked 45th nationally last year, allowing 212.3 passing yards a game. (The Terrapins also gave up 19 touchdown tosses.) Buechele’s 2,958 yards last year broke Colt McCoy’s freshman record at Texas. By the way, McCoy threw for 3,303 yards as a sophomore.

Sophomore Tyrrell Pigrome, the Terrapins’ announced starter at quarterback, was a three-star athlete coming out of high school. His dual-threat status will be tested — Maryland allowed 49 sacks last year. The Terrapins have four starters back on the offensive line, but Texas returns plenty of talent from a defense that ranked fifth nationally in sacks last year (3.42 per game). Thirteen current Longhorns had at least a half-sack in 2016.

Both teams have an “or” listed atop their backfields’ depth chart. Texas is deciding between Kyle Porter and Chris Warren III, although Tom Herman said Porter would have gotten the outright assignment had he not missed practice time with a shoulder injury. Maryland has not committed to Ty Johnson or Lorenzo Harrison III, but Johnson does have a 1,000-yard season to his credit. (The six scholarship backs on UT’s roster have combined for 1,088 career yards).

After allowing 258.5 passing yards per game in 2016, Texas defensive backs have maintained they need to earn back the title of DBU. They’ll start working on that against Moore. Last year, Maryland’s 5-foot-11, 215-pound junior had 41 catches while leading the team in receiving yards (637) and touchdown catches (6). Moore is eyeing NFL receivers Torrey Smith, Stefon Diggs and Darrius Heyward-Bey in Maryland’s’s record books, so Texas corners Kris Boyd and Holton Hill will be busy.

Herman, 42, and Durkin, 39, are both flirting with veteran Oklahoma State coach Mike Gundy’s definition of a man, but don’t let that youth fool you. Herman won a national championship as Ohio State’s offensive coordinator and led Houston to a 22-4 mark in two seasons. By going 6-7 in his first year as a head coach, Durkin doubled Maryland’s win total from 2015.

The post Texas vs. Maryland: 5 key matchups to watch appeared first on HookEm.